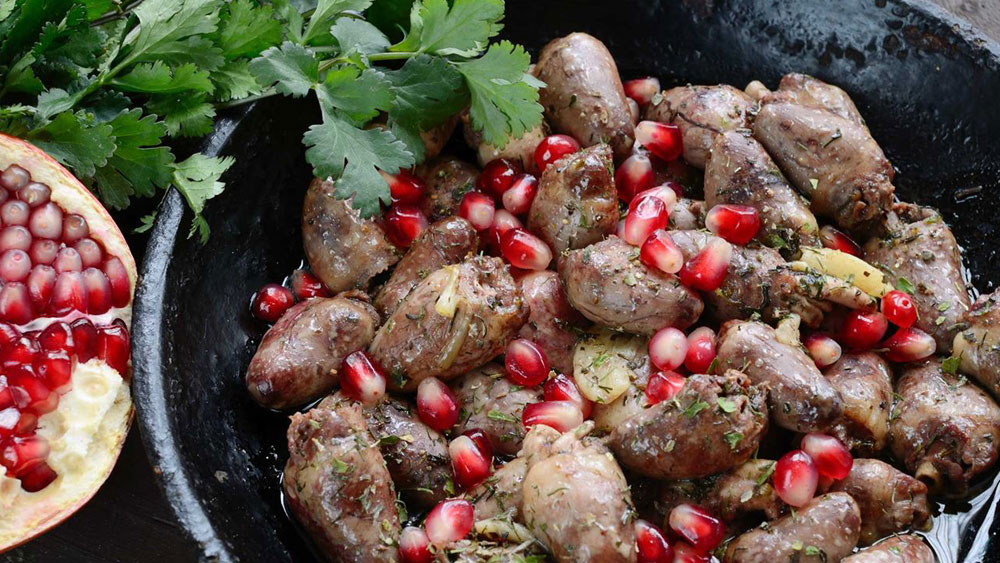 What do liver, heart, intestines, tongue, and every strange-smelling meat your father would jokingly try to get to you eat when you were younger have in common?

Often overlooked in American cuisine, offal is finally starting to catch on, and for good reason; offal offers a rich world of flavors, textures, and nutrients. All you have to do is give it a shot!

Offal is a catch-all term for internal organs and entrails. It literally means “off all”, or things that have fallen off while butchering, and “waste” in German, although it in no way deserves that label because offal is incredibly tasty.

Also referred to as variety meats, offal can be everything from liver, to bone marrow, to tripe, to heart, and it’s not animal-specific. You can attach offal to the animal you’re referring to, like beef offal or pork offal.

Outside of a culinary context, it can mean anything in the animal that isn’t going to be used for animal or human consumption.

Offal has a rich culinary history, dating back to our time as prized meats in hunter-gatherer societies[*]. While America has been reluctant to adopt offal to the same effect as some other countries, there are still a variety of dishes that utilize offal in America, and each year it seems to increase in popularity.

Some more familiar offal for Americans include calf livers and beef tongue, but opening up yourself to the world of offal includes an amazing array of international delicacies[*], including:

Besides the culinary adventurism offal provides, organ meats have a lot of nutritional value.

While there are small variations in nutrition across the different animals and organs, most offal is highly nutritious and more densely packed with nutrients on a per calorie basis than muscle meats.

Along with being a high protein source with plenty of essential amino acids, offal offers high amounts of folate, vitamin B12, iron, magnesium, selenium, zinc, and fat-soluble vitamins A, D, E, and K[*].

Here’s a breakdown of a 1oz serving of chicken liver, for context:

The upsides of offal

You may be surprised to hear that iron is the most common nutritional deficiency in the U.S. Iron helps create hemoglobin, which is the substance that carries oxygen from your lungs to the rest of your body. Getting the right amount of iron can help you feel less fatigued, and offal is a great source of this essential mineral[*].

Offal has a lot of protein per gram, so even though it’s typical to eat smaller portions of offal compared to other cuts, you still get plenty of stomach-filling proteins. This helps you stay full longer and snack less.

Choline is another essential nutrient offered by offal. It helps liver function, healthy brain development, muscle movement, your nervous system, and metabolism, and most people don’t get enough of this nutrient either[*].

Offal is often a cost-effective option

Since offal isn’t in high demand by average American consumers, butchers often discard pieces of offal that are perfectly good (and delicious) to eat. Chances are the butchers and meat providers will sell offal at a price lower than your standard cuts.

For similar reasons that the price of offal can be lower, you can also impact the environment by helping use more of each cow. The more we can eat from a single cow, the less we discard.

Use caution when eating offal if you’re pregnant

Offal is extremely high in Vitamin A, which can contribute to birth defects in pregnant women when eaten in high quantities[*].

Some offal is high in cholesterol

Most offal has a high amount of cholesterol, but keep in mind that eating foods high in cholesterol is not directly linked to higher blood cholesterol or heart disease risk[*].

It can be problematic for people suffering from gout

Purine is linked to gout inflammation, and offal carries this compound. If you suffer from gout, you should avoid eating offal and other foods that contain purine[*].

Offal tends to spoil faster than other meats

Offal isn’t great for long-term storage because it goes bad faster than traditional cuts. Make sure to buy fresh from a respected meat provider or butcher and plan to eat the offal as soon as possible.

How to add offal to your diet

Getting started with offal meat is easy and absolutely worth it. You have lots of options to choose from in the world of offal, but whatever you choose, make sure you buy grass-fed offal.

Why? Offal or organ meats from grass-fed animals are chock full of nutrients, and that is a direct effect stemming from the diet and conditions in which they were raised in. Animals subjected to unnatural diets, drugs, and poor living conditions affect the health of their organs, which in turn affects their flavor and nutrient profiles[*].

At US Wellness Meats, we incorporate a 30 to 45-day rest period between grazing and increase the density of existing plants in our grass-fed cattle pastures while allowing for the re-introduction of new native plants.

As a result, all of our grass-fed cows are eating the most natural food and are treated with the utmost care. This devotion to sustainable and humane practices is exactly why our meat is so delicious and enriching.

Get started with these types of offal

A common complaint of offal is the distinctive flavor that accompanies it, much like seafood. While this is present across all offal, the ways in which you cook it, and the types of offal you choose can dramatically affect how pronounced it is.

We recommend starting with types of offal below — think of them as your gateway to a whole new culinary world!

Sweetbreads, deliciously rich cuts of the thymus gland, are typically fried, served like gourmet chicken bites and are a great way to experience offal.

Head cheese is an odd name, but don’t look past this pâté cousin. Head cheese is made from the bits left behind in the head after the brain and other organs have been removed, and the high gelatin content cooks down into a delicious spread.

Yes, bone marrow is considered offal! This trendy protein source is often found in pho, and we recommend getting veal bone marrow to start with.

Tongue is often braised or boiled for hours to remove the skin and is usually pickled or corned. It carries a rich flavor due to its high fat content — homemade “lengua” tacos are a great way to try this offal!

Liver is extremely rich and buttery and is probably the most popular offal in the world. Famous in French cuisine, liver is a must-try for any food lover. We recommend trying foie gras or pâté!

Offal doesn’t stop there — hearts, kidneys, tripe — there are so many delicious types of offal to try, and we hope we’ve convinced you to give offal a try. These meats are absolutely delicious and shouldn’t be ignored.

Shop a delicious variety of grass-fed offal at US Wellness Meats!