What Is Pork Belly? Taste, Uses, & Where to Buy 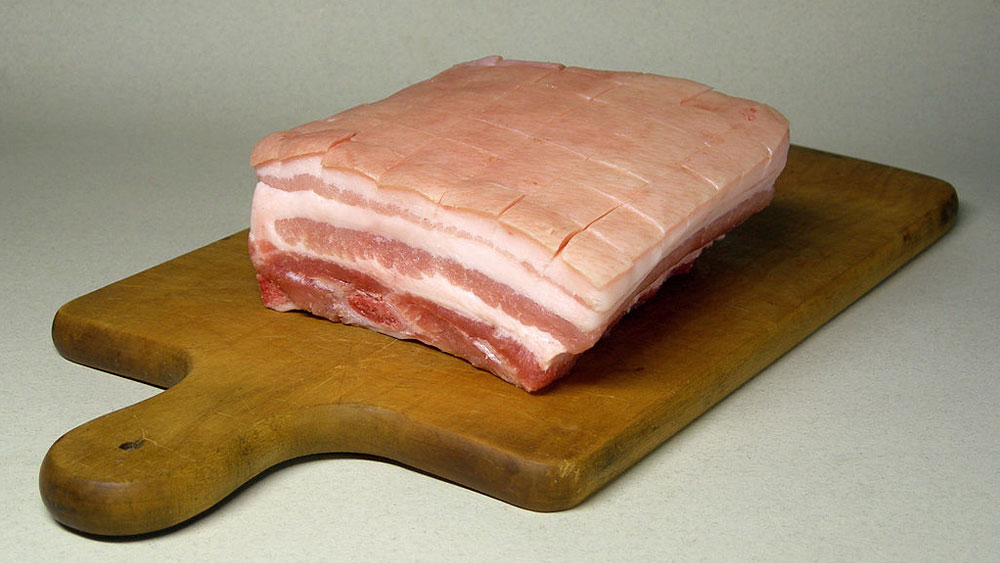 Photo by Rainer Zenz / CC BY

Pork belly sits a bit to the side of mainstream culinary culture in America. It’s a type of meat almost all of us have come into contact with without realizing it, and we most commonly associate pork belly with bao buns and other Korean or Chinese eats.

When we think of pork belly, we think of golden, crackly, and deliciously rich cuts of meat that almost melt in your mouth after you break through its exterior. And while that is accurate, that’s not all there is to the story.

What is pork belly?

Pork belly is exactly that, the belly of a pig, and we don’t mean the stomach when we say belly! The stomach is an organ in the interior of the pig, whereas pork belly is the cut taken from the underside of the pig.

Pork belly is typically sold as a large, thick slab, and it features rich lines of fat and is boneless, making it ideal for cooking methods that retain moisture like slow roasting.

The skin on the outside of the cut is also quite tough, so that’s another reason why slow cooking methods are often used with pork belly. Softening up the skin with a long roast and then finishing it off with a quick pan fry is a surefire way to have delicious pork belly.

Not quite. Both cuts can be from the same part of the pig, but their preparation and slicing are different. The main difference is the decision to cure — bacon is cured, and curing is simply soaking the meat in a salt solution, drying it, and then usually smoking it with wood such as hickory.

The difference in bacon comes down to the quality of the pork, decisions around spices, and ultimately whether you smoke it or add sugar for a sweeter flavor profile.

You can also get bacon from more places. Bacon is usually cut from the belly or side of a pig, but it can also be cut from the neck, back, and any other areas where the fat to meat ratio is appropriate. That’s not exclusive to pigs either. Turkey bacon, venison bacon, and beef bacon are all popular.

Pork belly, on the other hand, is restricted by both location and animal. This cut is exclusively from the belly of a pig, and it’s sold as a slab instead of sliced.

A typical pork belly cut is sold as a big slab, like this: 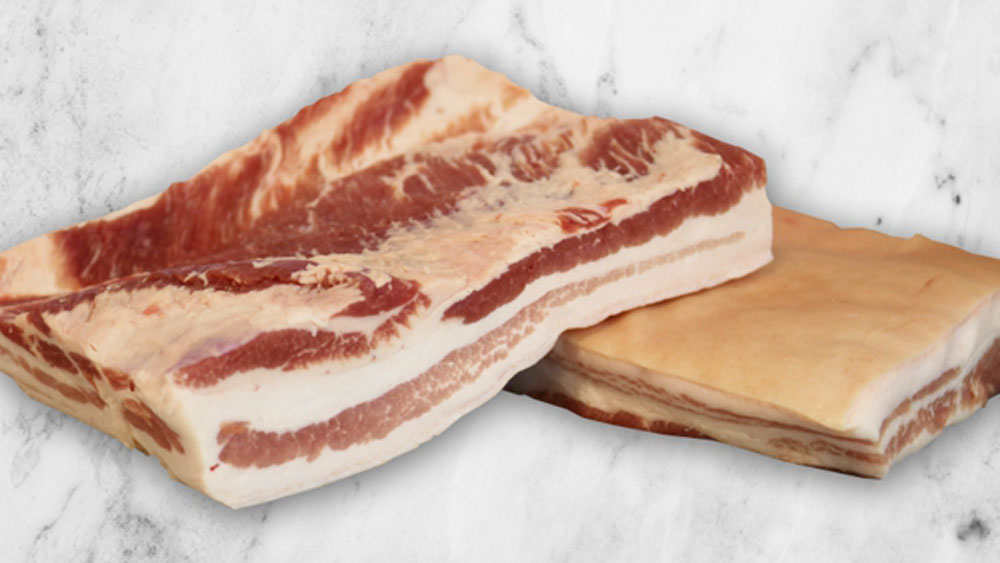 You can see how bacon is cut from the same place, right? All you would have to do is cut lengthwise in thin strips to get delicious bacon. For the more adventurous cooks out there, you could absolutely buy pork belly and cure it yourself for homemade bacon!

A big factor in what determines the taste of pork belly comes down to having the skin on or skin off. Since most pork belly is skin on, we like to describe it as a very rich, moist meat that is offset by a snappy exterior.

Imagine a perfectly moist bite of pork that’s wrapped in a saltier crunch. That’s pork belly! The marinade you choose also has an impact, of course.

What is pork belly used for?

You can swap pork belly for any recipe that requires bacon — from casseroles to topping mac and cheese, to serving it alongside vegetables, pork belly is extremely versatile.

It’s most popular in Chinese, Korean, and Philippine cuisines, but it is not exclusive to those cuisines by any means.

Pork belly can make a wonderful appetizer as well. It’s common in places like Peru to use a stone oven to cook up a big slab of pork belly, cut it up, and then eat it in small bites at a party before the main course.

How do you season pork belly?

That depends on what you’re using it for. We’d argue that with the right pork belly, you don’t need anything besides salt and pepper if it’s cooked well. Fresh cracked white pepper and rock salt in an oven can go a long way — especially if you’re serving it as a simple appetizer with a sauce like fresh mustard or a soy-based sweet sauce.

If you’re planning on making it the center of a meal, then preparing a marinade is your best bet to pack some extra flavor in. You have a plethora of options here, but typically you want to shape your marinade around the style of cooking you’re making.

For example, if you’re making a Chinese pork belly alongside fried rice, you’d almost certainly use a combination of vinegar, Chinese 5 spice, and soy sauce. Check out our recipe suggestions down below for some specific ideas!

How do you cook pork belly?

In our opinion, pork belly is best when it comes out cracklin’ fresh with puffy bubbles all over the exterior. There’s something about the contrasting textures of the bubbly skin and moist interior that make this cut irresistible. Here are five tips for getting the most out of your pork belly.

1. If you want crackly, you have to poke holes in the skin.

Restaurants usually have an official tool for this, but you can get by with an ice pick or any other tool that is sharp enough to poke through the skin. Just like you poke holes in potatoes with a fork, you do the same thing here. This allows the moisture to come up out of the meat when you salt it and create those wonderful pockets of air that are so important to the texture.

2. Use a thick salt like rock salt to draw moisture out.

By using a salt that is thicker than the holes you poke in the pork belly, you can capitalize on the moisture the salting brings without oversalting it. Many recipes advise an initial bake with rock salt and then “peeling off the salt cover” before its final pass through the oven.

3. Get creative with your marinade.

The pork belly is your canvas! You could take it the Chinese route we described above or how about a Latin spin? Use lime juice, cilantro, paprika, and cumin for wonderfully rich pork belly that would be to die for in tacos. Or why not take it a more traditionally American route? Worcestershire sauce, salt, pepper, and BBQ? Or why not toss in some hot chili peppers to give it a kick? Get experimenting! That’s half the fun.

4. Cut pork belly into small pieces due to its richness.

Small bites of pork belly go a long way in any dish. This cut is so rich and tasty that large pieces can be a bit overwhelming. Cut small and let your guests determine how much they’d like!

5. Serve it alongside something light.

And since the pork belly can be a bit heavy, it’s really nice to serve it alongside something light and acidic like a lemony arugula salad or fresh vegetables.

There are so many ways to cook pork belly, but here are a few of our favorites!

This recipe from the BBC is great for putting that Fall spin on pork belly. The combination of apple and sage is so good.

Who doesn’t love Jamie Oliver? His recipes never seem to fail, and he does a fantastic job breaking down how to approach pork belly in this video.

This one from La Crema is for wine lovers. Slow cooking pork belly in a red wine sauce is a fantastic way to use this cut, and you won’t be disappointed. Serve it alongside asparagus and a cabernet sauvignon for a meal you won’t forget!

We wanted to include a 30-minute option here since pork belly can sometimes feel a bit overwhelming. This recipe from Julia’s Album does a clever job of getting the best bits of pork belly out in no time at all. Serve this over rice and top with fresh chives and sesame seeds!

Sticky and Chinese in the same sentence is always a safe bet, right? This recipe from Kitchen Sanctuary is so good, and you’ll be surprised at how tender and rich pork belly can be.

Where can you buy pork belly?

Pork belly isn’t available at all markets, but it’s often cheaper than you’d think when you can find it at a local butcher, although pork belly is starting to explode in popularity.

We think quality pork belly is worth the effort, and our NON-GMO and antibiotic-free skin-on pork belly has had nothing done to it since harvest. No cures, smoking or etc. It’s simply in the raw natural state. It can be prepared as a roast, steak, sliced into bacon, made as kabobs or tossed in a stir fry for that crispy cracklin’ delight. It’s the perfect canvas for your meal.

Pork belly is rich, versatile, and worth your time. We hope you feel inspired to pick up your own and start experimenting. Whatever seasonings, marinades, or cooking methods you decide on, we guarantee it will be delicious.