What Is Bologna Meat and What Is It Made Of? 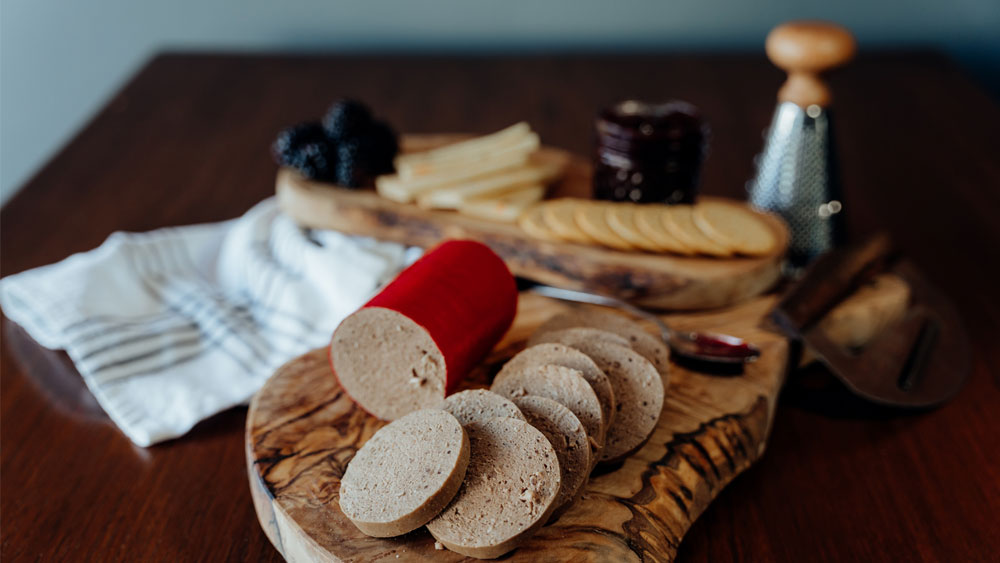 Bologna exists in a weird space between hot dogs, deli meat, and spam. Most of us can think of the taste, but if asked to describe what bologna is? Forget about it. We just know we eat it on white bread with a bit of Miracle Whip.

So let’s figure out together what makes this meat so delicious (and so divisive!)

What is bologna meat?

Bologna is a cured ground meat sausage typically consisting of pork and beef trimmings that are blended into a smooth texture before being packed into a casing and cooked via smoke, heat, and/or vinegar.

It has a light, sweet flavor that makes it easy to work into various dishes. The taste, texture, and cooking applications of bologna change depending on the quality of ingredients used and the preparation method. Classic American bologna most people imagine on crackers or on white bread is far from the only option. For example, artisan bologna is closer to what we consider salami and artisan sausage to be.

In the United States, producers of bologna are required to finely grind the meat and no fat can be visible[*]. The meat used in bologna varies widely, but traditional low-cost bologna is made with miscellaneous meat trimmings and byproducts from pork, beef, chicken, or turkey. Organ meats such as heart and liver are also more prevalent in cheaper brands. Additional fat, water, and stock is often added to keep the texture moist.

Higher-cost bologna can be made with more select cuts of beef, but just because bologna uses trimmings and organs doesn’t mean it is bad. In fact, this product reduces waste and takes advantage of highly nutritious organ meats, known as offal. The issue is that in cheaper brands, the quality of the trimmings and organs is so poor that the overall nutritional value of the bologna is minimal and even harmful[*].

The spice blend in bologna is characteristic of its flavor as well. Apart from typical sausage spices such as nutmeg, pepper, and coriander, bologna often includes a spice called myrtle berry[*]. This spice grows on an evergreen shrub close to the Mediterranean, and it contributes to bologna’s signature flavor.

Here’s a broad look at what you will find in a typical bologna slice:

A short history of bologna

Even though bologna feels thoroughly 20th century, we get the word Bologna from the Italian city of Bologna. Dating back to the mid-1600s, the city popularized a kind of salami called mortadella that featured pork with lumps of lard[*]. They used mortar and pestles to grind spices and nuts directly into a meat blend.

No one knows exactly how bologna made its way to the states, but it likely did through a combination of Italian and German immigrants bringing their culinary traditions to the new world.

Bologna rose in popularity due to its ability to keep well (a godsend during the Great Depression), its price point, and the rising consumption of sandwiches in the early 20th century. Oscar Mayer famously rode this wave to become one of America’s most successful food companies.

While traditionally associated with poverty (and therefore class), immigrants, school lunches, and prison food, chefs’ bias toward bologna is beginning to be reexamined after sliding sales throughout the 90s[*].

From pink deli slices to rich mortadella, there are many types of bologna.

American sandwich bologna is in the same category as hot dogs. In other words, this is a spiced meat paste that is packed into casings and then sliced. American bologna is usually smoked and seasoned with black pepper, myrtle berries, nutmeg, allspice, celery seed, and coriander[*]. In other words, pickling spices! It’s a far way from the mortadella of Italy, but it is delicious nonetheless!

If you see kosher or halal bologna, this just means it is made without any pork at all. That means they are usually beef and can be leaner than their pork counterparts.

This is the original Bologna from Italy and is made of ground pork, wine, pistachios, fat, and whatever spice blend the maker decides. The key difference between mortadella and stereotypical bologna is that the fats, pistachios, and peppers aren’t blended fully into the meat. This means you’ll have little chunks and bursts of fat or nuttiness as you eat the sausage.

Also, instead of smoking the meat, mortadella is made by slowly cooking the sausage while spraying it with water to preserve moisture, and the ratio of pork to fat is typically 7 to 3[*].

German bologna is similar to mortadella but has a signature garlic flavor. This is added by adding garlic powder to the spice blend or working actual garlic into the meat blend.

Popular in the UK and Ireland, polony is a finely ground pork and beef sausage[*] and is believed to be a spin on the word “bologna”. Some people use polony and bologna interchangeably, but polony is often smoked and is geographically specific.

Lebanon County in Pennsylvania, not the country, is the reason for this bologna’s namesake. The Dutch settlers of Pennsylvania made their bologna with beef, white pepper, nutmeg, and mace, and they typically smoked it. Lebanon bologna is also semi-dry, meaning it is closer to what many Americans consider summer sausage.

Ring bologna is packed into a narrow casing and is perfect for cheese and crackers. This casing creates semicircle cuts, sparking its name. Most pickled bologna is made from ring bologna by soaking it in a brine or pickle solution[*].

Rag bologna was popularized in West Tennessee, and the name comes from the fact that it is usually wrapped in cloth. Rag bologna is a bit of a departure from other types of bologna, using everything from flour to cereal as filler and often being soaked in lactic acid before being wrapped in paraffin wax.

Most bolognas have some sort of sugar added (typically corn syrup), but sweet bolognas specifically add extra sugar to bring out more sweetness in the sausage. This added sugar could be corn syrup, white sugar, or maple syrup.

Bologna is all about convenience and preservation. Whether it’s for sandwiches or crackers, bologna is ready to go out of the package and can stay good for a long time.

Miracle whip, white bread, cheese, and optional toppings is the most classic American way to eat bologna. Whether it’s a picnic, road trip, or packing school lunches, you can’t go wrong. Grab the cheapest ingredients possible for the most nostalgic experience, or buy healthier grass-fed bologna for a more nutritional option.

My favorite way to eat bologna is on a hot fried sandwich. This is essentially the cold-cut sandwich above but generously buttered or mayoed and fried up in a hot skillet. Make those slices thick too! If you’re up North, you may see fried bologna referred to as a Newfie steak[*].

Including the word salad in bologna salad is generous, but you can think of it like a sister salad to chicken salad. Chopped bologna, mayo, celery, spicy mustard, relish, and hard-boiled eggs. Yum!

Anytime you would add bacon bits or salami into a dish, you can sub bologna. Think pasta salad or broccoli salad. This is a great way to add a bit more body and salt to a dish!

I’d recommend grabbing higher-quality bologna if you are going to use it on a charcuterie board, but high-quality bologna can be a delicious addition to any meat and cheese board. Opt for grass-fed beef bologna for the best taste and nutrition.

Here are some fun bologna recipes to get you started!

Why not start with the best (in my opinion, at least). Good bologna, dill pickles, rye bread, mayo, spiced mustard, and fresh lettuce fried up on a skillet. Bon Appetit shows you how to do it right.

This recipe from The Country Cook is perfect for dipping at your next cookout or dinner party. You’ll have most of the ingredients in your pantry, and try adding in a bit of red pepper for a little spice!

It sounds weird, but trust us. This bologna stew from The Top Meal is great. You’re essentially making beef stew but subbing bologna in for cubed beef, making this a more budget-friendly option.

Another party and child-friendly bologna option is making some easy roll-ups. You can make this Pillsbury recipe using pre-made crescent rolls, or you could make your own! After you have the dough, you just roll bologna around a cheese stick, wrap that in your roll dough, and pop it in the oven. Try making a homemade sauce to accompany these. Maybe a spicy ketchup or ranch?

Have some picky eaters at home? Bologna casserole will be a hit for kids and adults. You can think of it as a bologna shepherd’s pie. Don’t be afraid to sneak some veggies in this recipe from AllRecipes either!

If you want to switch things up on your next grill out, why not make a build-your-own sandwich bar and have this smoked bologna from Serious Eats be the star? All you need to do is buy a whole bologna, score it, and smoke it! Try choosing a sweeter wood like apple, alder, or cherry for the best results!

Are spam and bologna the same thing?

No. Spam is also a blended meat paste packed into a container, but spam usually has fewer ingredients. For example, pork spam typically has cooked pork (which includes both the shoulder and ham), salt, water, potato starch, sugar, and sodium nitrite[*]. Spam is also served in a tin and bologna is typically sliced or in a casing.

Are hot dogs and bologna the same thing?

Essentially, yes. Hot dogs are just packaged into a different shape. Excluding artisan bologna and sausage that use different techniques and create different textures, basic hot dogs and bologna are both made from emulsified meat paste. You could argue that bologna needs to have myrtle berries to be bologna, but a lot of bologna producers just build their own spice blend and use it to create both bologna slices and hot dogs[*].

Are bologna and salami the same thing?

No. Both bologna and salami are types of sausages (encased meats), but salami is fermented and usually made from pork. This production process concentrates the meaty flavor.

Bologna, especially American sandwich bologna, is as processed as it gets. Of course, it can be eaten in moderation, but saying bologna is healthy is a stretch. You can, however, make it significantly more nutritious and healthy by opting for grass-fed bologna that uses higher-quality cuts and ingredients.

Bologna is delicious, and that isn’t baloney. This American staple has Italian roots and is usually meat trimmings from pork and beef ground into a fine paste and then smoked or slowly cooked. Eat it cold or hot, it’s delicious either way.

Bologna is best when it’s made from grass-fed sources

Bologna is always delicious, but classic bologna also suffers the most from industrial processing. It is a product born out of efficiency, but that efficiency means a lot of trimmings from antibiotic and hormone-packed sources raised in cramped, sickly environments. Then you’re often eating the worst parts of those animals that aren’t fit for any other product.

That’s why we recommend buying and eating bologna from healthier sources that prioritize health and taste over profit. It’s better for your taste buds, your body, and the planet.

Our one-pound roll of grass-fed beef bologna is packed with flavor and is also free of nitrates, nitrites, MSG, additives, preservatives, soy, dairy, and gluten.