What Are The Health Benefits Of Aronia Berries 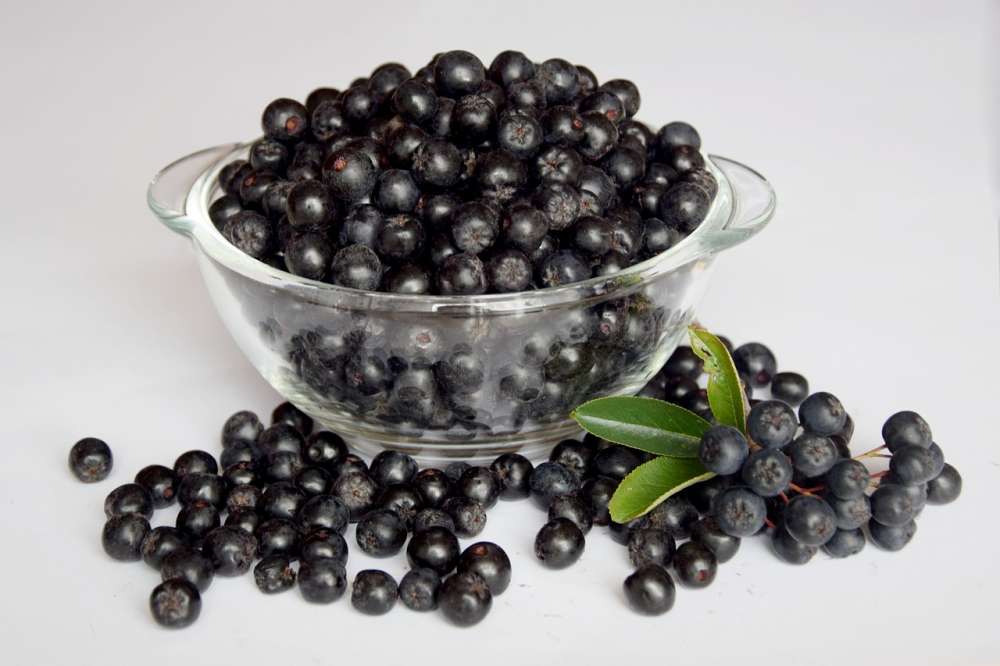 In today’s growing consciousness of health and well-being, more people are paying attention to the foods they put in their bodies. As such, aronia berries, with the traditional moniker chokeberries, are emerging on the scene. It’s not surprising, really, when you look at all the antioxidants and nutrition-rich compounds packed in each little bright blue berry, which looks like a cross between a small Concord grape and either a blueberry or cranberry, depending on the variety.

They grow in dense clusters and have a mouth-wateringly tart, as well as unique, flavor — hence the name chokeberry. The berries grow on small, deciduous shrubs in the colder regions of North America. They belong to the Rosaceae family and have the botanical name Aronia melanocarpa. Red chokeberries are Aronia arbutifolia. Nutrition and You calls them “tiny, wild, subarctic berries” and notes:

“(The) fruits (have) relatively thick, pigmented skin in pendulous clusters. Red berries are sweeter than black varieties, while the latter are slightly bitter in taste. However, black and blue color berries are rather rich sources [of the] anthocyanin class of pigment antioxidants.”1

Fresh aronia berries can be used in many of the same ways other berries are, including in jam, yogurt, wine and numerous desserts. Dried aronia berries are sold in many health food stores as a healthy snack. You can add them to your DIY trail mix and other foods if you want to “up” your nutrient quotient. The dried berries can also be infused with boiling water and steeped to make an antioxidant-rich herbal tea.

When you eat these and other foods containing chokeberries, you arm yourself with many powerful vitamins and minerals, including vitamins A, C and E, folate and such minerals as potassium, iron and manganese. Then there are the antioxidants and a host of phytonutrients packed in these little berries.

What’s the Big Deal About Antioxidants?

As mentioned, chokeberries come with several types of powerful antioxidants; in fact, they have the highest antioxidant capacity among other berries and any other fruit.2 Part of the significance of antioxidants is their ability to protect your body’s cells from the damaging effects of oxidation. Clinical studies indicate that eating berries, including aronia berries, on a regular basis helps fight neurological diseases, cancer, aging, inflammation, diabetes and bacterial infections.

One of the ways it accomplishes this is the antioxidant protection that can support overall health as they help eradicate free radicals in your bloodstream, organs and tissues that could otherwise cause healthy cells to mutate, Organic Facts explains.3 According to Aronia Berry News,4 100 grams (or 3.5 ounces) of aronia berries have an ORAC (oxygen radical absorbance capacity) value of just over 16,000. ORAC is a lab test5 that attempts to quantify the total antioxidant capacity in foods.

This is significant information for those who understand the toxins floating around in the air via pollution, in foods, gardens and foods sprayed with pesticides, chemically enhanced cleaning products, non-stick coating in cookware and many other ways disease-causing substances enter your body and increase your free radical load. Heal With Food notes:

“Antioxidants are believed to protect against many degenerative diseases, such as cancer and heart disease, and to slow down aging in general. They are also a crucial component of anti-wrinkle diets as they can help protect your skin from the harmful effects of environmental pollutants, tobacco smoke, the sun’s ultraviolet radiation and other factors that cause your body to produce free radicals.”6

Black aronia berries, especially, contain some of the highest phenolic flavonoid phytochemicals, called anthocyanins, in nature. More specifically, 100 grams of fresh berries contain about 1,480 milligrams (mg) of anthocyanins. The amount of proanthocyanidins (the colorless variety of anthocyanin7) is more like 664 mg per 100 grams.

Scientists have spent a great deal of time scrutinizing the health impacts aronia berries may have due to their deep purple hue, which often offers a clue to a plant-based food’s anthocyanin — and therefore antioxidant — content, known to have very impressive cancer-protective attributes. You see them in foods like cranberries, blueberries, grapes, red cabbage, plums, eggplants, blackberries, cherries, strawberries, purple asparagus and even radishes.8

More Ways Aronia Berries Can Change Your Health for the Better

According to Organic Facts,9 some of the more prominent and powerful elements in chokeberries include epicatechin, quercetin, caffeic acid, carotenes, malvidin, lutein and zeaxanthin. Nutrition and You tallies even more compounds to include such as cyanidin-3-galactoside, peonidin, delphinidin, petunidin, pelargonidin and caffeic acid.10 Aronia Berry News reports:

“Aronia berries are indeed some of nature’s best health supplements and the health benefits of this ‘superberry’ seem endless — in addition to the above mentioned — inhibit the development of blood clots and the early process of atherosclerosis. Aronia berries can help improve your memory as well!”11

The same site lists a number of other ways eating aronia berries can improve your health. Each one of the significant health benefits below is directly related to one of the berry’s many phytonutrients:

In addition, Heal With Food calls aronia berries a “gut health-promoting superfood” because of all the fiber they contain. Just 3.5 ounces provides 16.9 grams of fiber! One way fiber differs from other macro-nutrients such as proteins, carbs and fats is that fiber is not digested, but instead stays somewhat intact and serves to “push through” foods in your colon that may be hanging around, slowing down progress and, potentially, causing cancer.

Aronia berries can legitimately call themselves cancer protective for this very reason, as fiber passes along other health benefits besides healthy bowel movements, including overall improved bowel health, optimized cholesterol, possible weight loss and reduced diabetes risk. Fox News noted that the many antibacterial, antiviral and antidiabetic agents in aronia berries serve to:

“Fight the formation of arterial plaque … and … protect the liver against a host of insults and toxins. In our ever-increasingly diabetic society, aronia’s compounds help to lower blood sugar and improve the body’s own natural production of insulin.

Several of the compounds in aronia are natural cancer fighters, and protect against the development of tumors of the bladder, breasts, colon, lungs, ovaries and skin. In addition, these compounds fight Crohn’s disease, inhibit HIV, reduce uncomfortable symptoms of PMS and fight herpes. Preliminary studies have also shown that aronia may prove helpful in slowing the growth of glioblastoma — a form of fatal brain cancer.”12

Studies on the Health-Protective Potency of Aronia Berries

Scientists from the Department of Nutrition and Food Science at the University of Maryland investigated the potency of fruits with high amounts of anthocyanins, namely grapes, bilberries and black aronia berries, to test their chemopreventive activity against colon cancer. While all three extracts inhibited cancer cell growth, the chokeberry had the most potent effects.13

An arm of the U.S. Department of Agriculture (USDA), the National Institute of Food and Agriculture (NIFA), says chokeberries are rich in polyphenols, a type of micronutrient that may prevent cancer and cardiovascular disease.

Further, “Pre-clinical and clinical evidence suggest that consuming aronia berries may mitigate inflammation associated with chronic disease.”14 In animal studies, chemically induced esophageal cancer was decreased by between 30 percent and 60 percent, and the incidence of colon cancer by 80 percent, when exposed to anthocyanin extracts, and without impacting healthy cells.15 Med Daily notes:

“Their tumor suppression activity works at a different level of tumor activity; at initiation and promotion/progression stages of tumor development. They can be a practical research tool and hold a promising therapeutic resource since they contain the highest amount of anthocyanins among native North American berries.”16

Additionally, aronia berries played a crucial role in the survival of Native American tribes such as the Potawatomi in the area between Milwaukee, Detroit and Northern Indiana, especially in fighting colds and weakened immune systems, due to the berries’ high vitamin C content. But that’s not all. The United Tribes Technical College investigated the importance of berries in traditional diets and reported:

“Study continues on the phytochemical properties of chokeberries, cranberries, juneberries, wild grapes, wild raspberries, etc., which could reduce the incidence of Type 2 diabetes and chronic diseases in tribal communities.”17

Words of Caution — and Encouragement — Regarding Chokeberries

Aronia berries contain oxalic acid, a naturally occurring substance often found in fruits and vegetables, which may crystalize and encourage the development of urinary tract oxalate stones. Anyone with a history of oxalate stones should limit their intake and always drink adequate amounts of water to avoid an uncomfortable onset. Oxalic acid may also interfere with the absorption of magnesium, calcium and other minerals.

But here’s the good news: As a viable health food and fitness product, aronia berries are already surging into the marketplace, and some have received coveted USDA Organic certification, Fox News reports.

In addition, unlike strawberries (at the top of the Dirty Dozen list of most heavily sprayed produce) and many other fruits, aronia berries are naturally pest resistant, so they don’t require a lot of chemicals so prevalent in farming today. Still, if you look for aronia berries at your local grocery or health food store, ideally look for the organic brands.