This Is The Primary Benefit Of Niacin (B3) 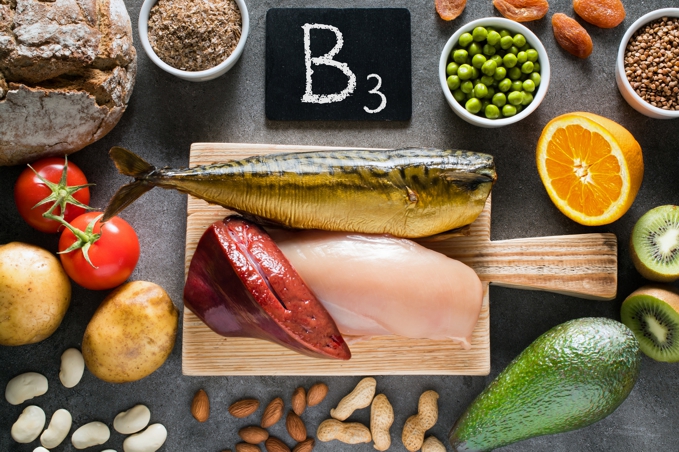 Niacin, also called vitamin B3, is a water-soluble vitamin that is found naturally in foods, is added to processed foods and can be bought as a supplement. Niacin plays a vital role in over 400 enzymes, and one study suggests that a diet rich in niacin could protect your skin against ultraviolet (UV) radiation.1

A severe niacin deficiency called pellagra is ultimately a lethal disease. While it was common in the early 20th century, pellagra is uncommon in industrialized populations where most processed foods are fortified with niacin. Currently, pellagra is limited to people living in poverty whose diets are low in niacin and protein.2

The disease is marked by the four D’s: diarrhea, dermatitis, dementia and death. Symptoms of the condition include a brown discoloration on skin exposed to sunlight, a bright red tongue and vomiting, constipation and/or diarrhea. Neurological symptoms include headache, fatigue, loss of memory and depression.

Without treatment, the disease progresses until a person exhibits paranoid and suicidal behaviors with visual and auditory hallucinations and dies. Although this deficiency is rare in industrialized nations, insufficiency contributes to several disease entities and researchers have found:3

There are three main forms of niacin, which are dietary precursors to nicotinamide adenine dinucleotide (NAD). These are nicotinamide riboside, nicotinic acid and nicotinamide.4 Researchers in Italy studied skin cells from nonmelanoma skin cancers and treated them with different doses of nicotinamide for 48, 24 and 18 hours, after which they were exposed to UV light.

The lab studies showed the cells that were pretreated with nicotinamide were protected from oxidative stress, including damage to DNA from ultraviolet rays. In addition, the data showed niacin reduced local inflammation and the production of reactive oxygen species. Laura Camillo participated in the study and commented in a press release:5

“Our study indicates that increasing the consumption of vitamin B3, which is readily available in the daily diet, will protect the skin from some of the effects of UV exposure, potentially reducing the incidence of non-melanoma skin cancers. However, the protective effect of vitamin B3 is short-acting, so it should be consumed no later than 24 to 48 hours before sun exposure.”

The current lab study supported data from past studies demonstrating similar results. In an animal model, nicotinamide helps prevent photocarcinogenesis and protected the skin against UVA and UVB light.6 Researchers also tested nicotinamide supplements twice-daily in a human trial with people who had actinic keratosis, a precursor to skin cancer.

The nicotinamide supplements reduced the actinic keratosis by 35% relative to the placebo used in the study when it was measured at two and four months. The results were presented at the 41st European Society for Dermatological Research Annual Meeting 2011.

In a paper published in American Health & Drug Benefits, the author reported on one study investigating the use of oral nicotinamide in people who were at high risk for skin cancer.7 The data showed the supplement reduced the rate of new diagnosis of basal cell and squamous cell carcinoma after one year by 23% when the results were compared against a placebo.

Niacin also lowered the risk the participant would develop actinic keratosis. It was estimated the use of this inexpensive supplement could reduce health care costs by approximately $4.8 million each year. The investigators stressed the results were in individuals who had been diagnosed with skin cancer in the past and may not apply to other populations.

In addition, the researchers believe vitamin B3 could be used as a preventive strategy and not treatment. The lead investigator from the University of Sydney also warned the prevention did not take the place of routine care and skin examinations, commenting:8

“This form of prevention is safe and inexpensive, costing around $10 per month, and it is widely available. It is ready to go straight to the clinic for high-risk patients with a track record of skin cancer. This is a new opportunity for skin cancer prevention.”

Prevalence of Skin Cancer Is Rising

Of the nonmelanoma types of skin cancer, nearly 80% are basal cell, which develop more often on the head and neck. These types of cancer grow slowly and rarely spread. Nearly 20% are squamous cell carcinomas that can be found in areas of the skin that had been burned, exposed to X-rays or damaged by chemicals. Merkel cell is a rare and highly aggressive form of cancer.

Experts estimate over 100,000 adults in the U.S. are diagnosed with invasive melanoma each year and it is the fifth most common cancer that can develop in any age person.11 From 1982 until 2011, the rate of melanoma in the U.S. doubled.12 Since then, the number of people diagnosed has continued to rise.13

Nicotinic acid has been used for more than 40 years to help control dyslipidemia.14 Supplementation with nicotinic acid from 1,000 milligrams (mg) to 2,000 mg have been used daily to increase HDL and lower LDL cholesterol in carefully monitored studies. However, doses this high can produce side effects.

Some clinical trials have demonstrated patients on niacin therapy have a lower number of cardiovascular events and deaths. Other trials were not as positive. After a review of the literature, the U.S. Food and Drug Administration concluded:15

“… scientific evidence no longer supports the conclusion that a drug-induced reduction in triglyceride levels and/or increase in HDL-cholesterol levels in statin-treated patients results in a reduction in the risk of cardiovascular events.”

As I’ve written before, it is the relationship between HDL, LDL and triglycerides that is a greater predictor of heart health and not the absolute numbers of each. This means the FDA statement supports lowering LDL cholesterol with dangerous statin medications but suggests altering HDL and triglyceride levels with an inexpensive and safe supplement would have no effect on heart health.

In one study published in the Journal of the American College of Cardiology, researchers evaluated data from 1966 to 1975, looking at the effectiveness and safety of five drugs in a population of 8,341 men.16

Two medications were discontinued early in the study because of adverse events. The niacin treatment showed modest benefit in reducing the number of heart attacks, but did not reduce all-cause mortality. However, researchers followed up with the group 15 years later, nearly nine years after the participants stopped using the interventions.

B Vitamins May Lower Risk of Worst COVID Outcomes

In the past, I have reviewed how nutrients such as vitamins C and D play a role in the treatment of COVID-19. A recently published paper has also highlighted the potential value of B vitamins.17 The paper was an international collaborative effort among researchers from the University of Oxford, United Arab Emirates University and the University of Melbourne Australia.18

Although there are no studies evaluating the efficacy of B vitamins on patients with COVID-19, the scientists advocate for research into the group of vitamins, stressing their importance to the immune system and immune competence. The paper does not suggest that B vitamins could prevent or treat COVID-19 alone.

However, as scientists have discovered many times, a single vitamin or nutritional supplement does not work alone, but in concert with others. COVID-19 has been dangerous for those with underlying medical conditions or older adults as it triggers an overactivation of your immune system and a cytokine or bradykinin storm.

Niacin and nicotinamide are important to your immune health as they are precursors to NAD+. This is a crucial signaling molecule that naturally declines with age. According to David Sinclair with Harvard Medical School, higher levels of NLRP3 inflammasomes are culprits in cytokines storms and are influenced by NAD+ levels.19

Niacin is a building block of NAD and NADP. This component is vital when combating inflammation, such as what happens during a viral infection like COVID-19. The scientists advocating for research into B vitamins explain:20

“NAD+ is released during the early stages of inflammation and has immunomodulatory properties, known to decrease the pro-inflammatory cytokines, IL-1β, IL-6 and TNF-α.

In addition, nicotinamide reduces viral replication (vaccinia virus, human immunodeficiency virus, enteroviruses, hepatitis B virus) and strengthens the body’s defense mechanisms. Taking into account the lung protective and immune strengthening roles of niacin, it could be used as an adjunct treatment for COVID-19 patients.”

Be Aware of a Niacin Flush

Niacin can be found in a wide variety of foods, including animal-based foods such as poultry, beef and fish, and nuts and grains.21 Many processed foods such as breads, cereals and infant formulas are fortified with niacin.

One of the highest sources of B3 is grass fed beef liver, and even a half a cup of chopped onions has 0.1 mg of niacin per serving. Other rich sources include brown rice, beef, pork and sockeye salmon.

If you are considering using a niacin supplement, be aware that one of the common side effects is a niacin flush. This most often happens when the vitamin is taken in large doses and usually only when using nicotinic acid. Niacinamide does not commonly produce the flushing side effect, but also does not have the same effect on cholesterol levels.22

A niacin flush doesn’t happen when you eat foods high in niacin. The condition is marked by symptoms of a burning or tingling sensation in the chest, neck and face.23 Your skin can feel warm to the touch and take on a flushed, red appearance. For some, as little as a 50 mg supplement can trigger the reaction.

Although it is irritating, and sometimes alarming, it is nonetheless harmless. Some find using a time release supplement, taking it with meals or drinking plenty of fluid can reduce the flushing effect. Taking smaller doses spread throughout the day may also reduce the potential of a reaction.