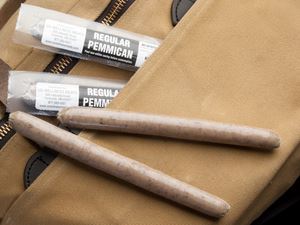 US Wellness Meats offers a wide variety of nutrient rich 100% grass-fed, grass-finished beef, lamb, bison, & Dairy. You’ll also find we carry the highest quality, premium wild-caught seafood, heritage pork, free-range poultry and more! For those of you interested in a Paleo or Ketogenic or low carbohydrate diet, please browse through our products dedicated to making these dietary changes more accessible. Looking for protein packed snacks high in healthy fats? Try our all-natural, grass-fed pemmican bars for an energy boost and to increase your fat intake.

This study is just one more example of science confirming that diet makes a major impact in our health and well-being. Our grass-fed beef and wild-caught seafood products are loaded with Omega-3 Fatty Acids.

For several years, medical researchers, doctors and dieticians have known that a low carbohydrate diet and plentiful fat can prevent a range of lifestyle and age-related diseases and thus promote healthy aging. But researchers from around the world have not been able to explain why this is the case. They have just been reasonably certain that the energy metabolism and its chemical intermediates (metabolites) play a central role.

An interdisciplinary team of researchers from Aarhus University has now found more than just an important piece of the puzzle — a piece that suggests that the puzzle that is our metabolism looks somewhat different than science has so far believed. This is also the reason why the research group’s article has made the front cover of the journal Cell Chemical Biology.

On a general level, the researchers have discovered that the fat-metabolism in the cells takes place simultaneously with a detoxification of the harmful substances from the blood sugar, which can avert the damage that can in turn lead to age-related diseases such as diabetes, Alzheimer’s and cancer. This indicates that we have a detoxification system which we were not previously aware of.

The detoxification takes place in an unexpected chemical process — unexpected because it happens without the involvement of the enzymes that science has so far focused on in understanding the metabolism and the decomposition of sugar.

The process is important because methylglyoxal is a reactive metabolite, i.e. it is toxic for the cells. It plays a major role in the above-mentioned age-related diseases. This means that untreated diabetics have increased concentrations of sugars and methylglyoxal in their blood. They also have increased amounts of ketone substances (see the fact box below).

In chemical terms, what happens in the process between the two metabolites is that a third metabolite, 3-HHD, emerges, which does not have the harmful effects of methylglyoxal. The Danish research team are the first to find 3-HHD in blood from people who lacked insulin and/or had fasted the night before — a condition known to give ketosis.

As suggested above, the study helps to uncover new aspects of the metabolic process in living organisms.

“Previous research partly based on animal experiments using mice and monkeys shows that a diet with less sugar and more fat protects against diseases such as diabetes, Alzheimer’s and cancer. At the same time, it has also been known that methylglyoxal causes age-related diseases. We have found a new metabolite that demonstrates an alternative chemical detoxification of methylglyoxal when we burn fat. It is a surprising discovery, as ketones in themselves can lead to the harmful sugar metabolite methylglyoxal. The explanation may be a delicate balance between creation and detoxification. In any case, this illustrates that biological systems are enormously complex,” said Mogens Johannsen, who is professor of chemical biology at the Department of Forensic Medicine at Aarhus University and one of the leading capacities in the research partnership.

“It is a unique situation to take a reaction from a chemistry laboratory and use it to finally prove that it takes place in living human beings and potentially can play a role in vital biological processes,” he added.

From chemistry lab to living humans

Mogens Johannsen does not doubt the value of research into the role of ketones and reactive metabolites in biological aging.

“Now we have evidence for saying that ketones can minimise the amount of harmful methylglyoxal in living organisms, and that is a discovery that gets noticed, as it involves two of the most debated substances within biological aging and late diabetic complications. Moreover, these substances react with each other,” said Mogens Johannsen.

The study is relevant for developing treatments of people suffering from complications after diabetes, in particular patients with late diabetic complications such as neuropathy, which can be very painful.

“One perspective could be to follow a diet with fewer carbohydrates and more fat. The fat helps to encapsulate and destroy the sugars that cause the pain,” said Mogens Johannsen. Though he also emphasised that clinical trails will be needed to establish this aspect before he would recommend particular diets.

Aarhus University. “The body’s own fat-metabolism protects against the harmful effects of sugar: Researchers from Aarhus University have discovered a metabolite that reveals how the body’s fat-metabolism provides protection against the harmful effects of sugar. This may explain be the chemical link between a low carbohydrate diet and healthy aging..” ScienceDaily. ScienceDaily, 15 September 2017. <www.sciencedaily.com/releases/2017/09/170915144158.htm>.