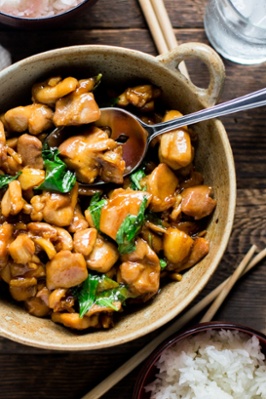 Sanbeiji is a popular Chinese dish, most often served in Southern China and Taiwan. The dish derives its name from its three key ingredients: sweet rice wine, soy sauce, and sesame oil. Garlic, ginger, fish sauce, honey, and basil round out the flavors in this deceptively simple preparation. Chicken is the most common protein, but pork, and occasionally frog, are also used.

What sets this dish apart is that there is no real trickery involved; the chicken and sauce simmer until the sauce evaporates, then it is removed from heat right when the chicken starts to sizzle and pop. The result is fully-flavored with a delightful texture – no breading or thickener required. 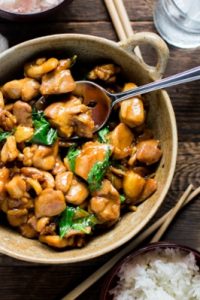 Russ Crandall creates delicious recipes for his website The Domestic Man where you’ll find gluten-free and Paleo-friendly recipes posted every Tuesday. His recipes focus on classic, traditional, and international dishes from a historical, linguistic, and cultural perspective. Russ changed his diet in 2010 and it had a profound effect on some serious health issues. He has since worked as a contributor to Food & Wine, Yahoo! Food, and AOL.com’s Kitchen Daily; his recipes have also been featured in People Magazine, The Huffington Post, BuzzFeed, and Mashable. This website was a finalist in the 2013 Saveur Best Food Blog Awards. His debut cookbook, The Ancestral Table: Paleo Recipes for a Traditional Lifestyle, was released in 2014, and a second cookbook, The New York Times-bestselling Paleo Takeout: Restaurant Favorites without the Junk, in June 2015.