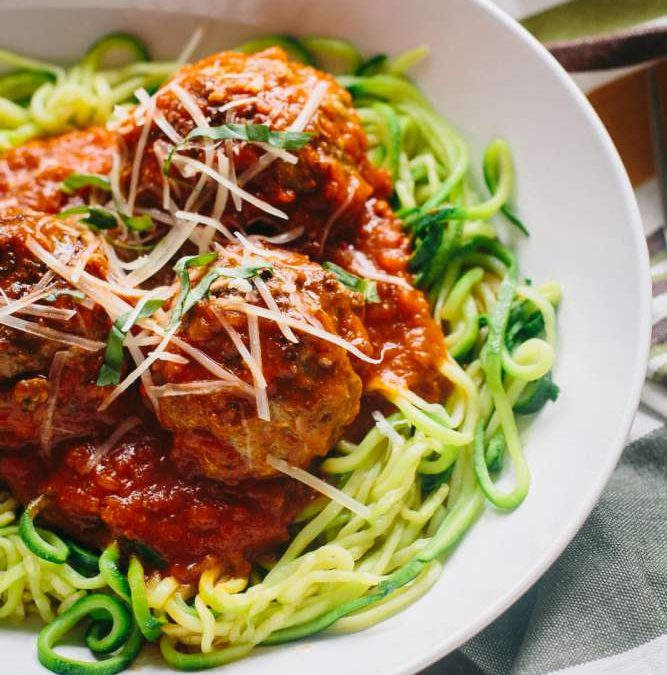 There are some dishes that remain a favorite from childhood to adulthood. Spaghetti and Meatballs is one of those dishes! It doesn’t matter how old you are, you may find yourself craving this yummy meal. As we get older, we may have changing dietary needs and classic spaghetti may not be the right choice for us. Don’t worry because Russ Crandall has created the perfect alternative, Spaghetti and Meatballs served over your choice of noodles (gluten-free, zucchini, or spaghetti squash). A special thank you to Russ, we can’t wait to try this for ourselves!

I realize that this recipe’s title starts with the word “spaghetti”, but make no mistake about it – the meatballs are the star of this week. Since first developing this meatball recipe for Paleo Takeout, we’ve made it often, at least monthly. There are a few little touches that make the meatballs just perfect: a mix of beef and pork so that the meat flavor is prominent but not overwhelming, egg yolks for creaminess, gelatin powder for a smooth and succulent texture, and bacon for little bursts of umami.

One of my favorite ways to describe these meatballs is to say that they’ll make your Italian grandmother swoon. Matter of fact, just as I’m writing this intro, I’ve decided to add them to our dinner menu this week.

Here is the writeup from Paleo Takeout:

It seems like every country has a meatball recipe, from the very popular Swedish meatballs to the relatively unknown Finnish meatballs (Lihapullat), often made with reindeer meat. Italian meatballs are larger than most other meatballs and are prized for their tenderness. Gelatin may seem like a strange addition, but it gives the meatballs a velvety texture, not unlike what you’d expect from eating veal. 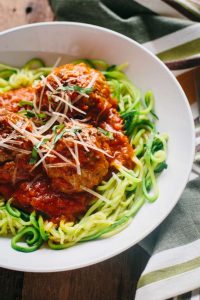