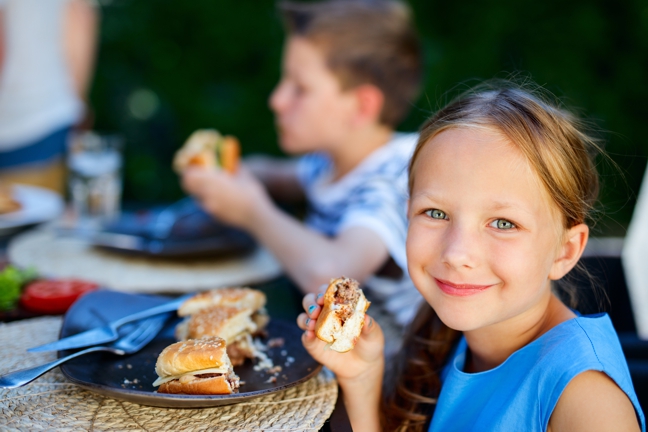 In this short video, you’ll see a food program that Hilary Boynton The Lunch Lady developed for The Manzanita School in Topanga, California. Her goal was to overhaul a system that feeds children a long list of processed foods high in toxins and sugars.

The National School Lunch Program is a federally funded program that provides meals at low-cost or free for children in public and nonprofit private schools. The program was established by President Harry Truman in 1946.1

In the first year, approximately 7.1 million children participated. By 2016, 30.4 million children were fed lunches in school.2 Schools are reimbursed for the meals in the program at different rates, but authorities can receive an extra 6 cents per meal when the program in their school is certified as in compliance.3

One compliance factor is the foods the school supplies the children. They can select from foods approved by the USDA. These include mostly frozen, canned or shelf-stable fruits, vegetables and tomato sauces.4 Driven in part by a desire for children to eat truly nutritious foods, Boynton began a crusade.

Boynton’s Story Is a Driving Force Behind Her Work

In an interview with Justin Nault,5 Boynton talked about how her journey began and the mission she found herself on to change the status quo in the school lunch program. Her story began in her teen years when she and her parents began believing, and following, the low-fat nutrition model.

She practiced it for roughly 10 years, later finding it had a negative effect on her fertility. After experiencing four miscarriages over three years, she got pregnant using in-vitro fertilization and gave birth to triplets. Within a couple years she was pregnant naturally with a son who developed eczema when he was 2 months old.

She was told by medical experts that he would need steroid creams and an over-the-counter antihistamine daily, and that he would most likely develop asthma and allergies as they went hand in hand with eczema. Her life got significantly more hectic when she became pregnant with her fifth child when her fourth child was 6 months old. Suddenly she had five children under the age of 4.

Unwilling to keep her fourth child on steroids and medication, she began investigating nutritional changes she could make to help him heal. She learned about raw milk and began giving it to him with cod liver oil. Within months she found he was completely healed, which demonstrated to her the power of food as medicine and how it could heal the body.

She soon began running an Amish co-op out of her house because she believed wholeheartedly that others should be able to experience the power of eating food close to the source of production. Her mission became to share this information with others, so she graduated from the Institute of Integrative Nutrition and began teaching cooking classes out of her home.

During that time, one of the triplets developed epilepsy and she began investigating dietary changes that may help her little girl. She was encouraged to look at the GAPS diet for her daughter and for the rest of the family. One of her students was a photographer who was also using the GAPS diet for her family. They had not found many resources to help create recipes at home and decided to write a book together. This became “The Heal Your Gut Cookbook.”

‘The Heal Your Gut Cookbook’ Author Aims at School Children

Boynton describes herself as a food activist and hopes that her work will help to wake people up to the connection between their health and the foods that they eat. Ultimately, she’s passionate about children’s health, which led to her becoming the lunch lady at her kid’s school in an effort to combat the devastating effects of poor nutrition.6

Boynton met Charles Barth and Joel Rodgers at a local farmers market.7 Barth was well-acquainted with local food systems in his work, and Rodgers was a television executive producer with ties to local farmers and food products.

The group teamed up to co-found “School of Lunch” to help teach others how to promote healthy nutrition in the schools — the bottom line was to have an impact on the health and lives of children, offering training and consulting based on the success of their model.

She calls it a Regen-Living lifestyle as she helps to teach that moving back to a foundation of ancestral eating, striving for a healthy relationship between body, environment and local food sources is foundational.8 The basic tenets of the Regen-Living system9 are sunshine, sleep, exercise, clean water, movement, community and nature connection.

She establishes this through working with local farmers to provide a farm-to-table supply chain to meet nutritional needs of children. The idea is to strengthen the local food system, while breaking the trend of chronic illness by teaching children how to eat healthy foods.

The program also helps children to understand where the food comes from and makes the farmers and business owners in the area a part of the school lunch program with a farmer-to-table focus.10 School of Lunch provides a Lunch Leader Training Academy,11 which is a weeklong retreat for parents, educators and cooks to learn how to make a change in their lives.

Barth is the current head of the Slow Food Ventura County chapter. Slow Food is an organization that focuses on encouraging people to “eat food that is good for them, good for the people who grow it and good for the planet.”12

The organization began 30 years ago when Italians in Rome were protesting the opening of a fast- food franchise at the base of the Spanish Steps. The activists brought large bowls of penne pasta to share with the crowd and chanted “We don’t want fast food. We want slow food!”13

The organization has grown to over 160 countries, including 150 chapters in the U.S. Their mission is to “create dramatic and lasting change in the food system” by inspiring “individuals and communities to change the world through food that is good, clean and fair for all.”14 Their aim is to rediscover the flavors of regional cooking and get rid of the damaging effects of fast food.

Boynton is an advocate of the GAPS diet, which stands for the gut and psychology syndrome, and more recently, the gut and physiology syndrome. The nutritional plan was developed by neurologist and nutritionist Dr. Natasha Campbell-McBride, and derived from a theory that many of the conditions that affect the neurological system and the rest of the body are based on a leaky gut.

When the gut wall allows molecules into the bloodstream from the intestinal tract, it raises the inflammatory response and can lead to an array of medical conditions. The diet is essentially an elimination diet that helps the gut heal over time.

There have been no scientific studies that demonstrate benefits or problems associated with the diet,15 yet many, including Boynton, have reported experiencing benefits from following the program.16 The nutritional plan does not advocate using any processed foods or branded supplementation and yet it has been widely criticized as it appears restrictive based on a current Western diet.

In a podcast on Urban Farmer,17 Boynton describes the GAPS diet as placing your gut system back at “Ground Zero.” This removes many of the irritants to your system and promotes the use of fermented foods and the elimination of high fiber inflammatory foods to help re-establish a healthy gut microbiome.

Sugar and processed foods are never allowed, but once your gut system has been rebalanced, you have the opportunity to be more flexible. After following the nutritional plan with her family for two years and seeing remarkable changes in the health of her children, her spouse and herself, Boynton became a GAPS diet expert.

I have written about the importance of a healthy gut microbiome on mental and physical health on multiple occasions. The impact begins in infancy, as demonstrated by data18 pulled from the Canadian Healthy Infant Longitudinal Development (CHILD) study. Researchers found the highest level of beneficial bacteria at 3 months and 1 year was in infants who were exclusively breastfed.

Your gut microbiome has an influence over dozens of health conditions, including depression,21 chronic fatigue syndrome, Parkinson’s disease, allergies22 and cancer. One of the reasons is because your gut is a primary location for your immune system.23 So when you disrupt the gut microbiome you automatically disrupt your immune function.

Fermented Foods Are Good for Your Gut

The GAPS diet is designed for individuals who have significant health conditions. If the process of going through an elimination diet seems initially overwhelming, consider significantly reducing or eliminating processed foods and beverages as well as sugar from your diet while adding in fermented foods, meat stocks and bone broths.

The process of fermentation was initially used to preserve food. Over time, many cultures incorporated these foods into their daily diets and shared them with the world. For example, Japanese natto, Korean kimchi and German sauerkraut are popular in many areas outside their respective places of origin.24

Fermentation is controlled by the microorganisms and the type of food. Many of these microorganisms are beneficial to your gut microbiome. In fact, the yogurt industry has advertised that eating a container a day may be helpful in maintaining digestive health.

However, while these products may have probiotics, they also contain an abundance of sugar that feeds the harmful bacteria in your gut. This is just one reason why store-bought yogurt is typically not beneficial.

Boynton promotes using sourdough fermented breads as they digest more easily than yeast bread and don’t cause as much damage to the gastrointestinal tract. The authors of one study25 found those who ate sourdough bread had faster gastric emptying and transit time through the intestinal tract.

Meat stocks (lower in glutamic acid) are used on The GAPS Intro diet, and bone broths are staples of the Full GAPS diet as they are not only easily digestible, but they also contain a profound number of immune optimizing components that are foundational building blocks for the treatment of autoimmune diseases. Bone broth can affect inflammation, weight loss and sleep.

Not all bones are created equal, so it’s important to choose those that’ll provide the most nourishing ingredients. In the same article I also share sample bone broth recipes. For more information on Hilary and School of Lunch and to learn about upcoming training academies please visit www.schooloflunch.com.