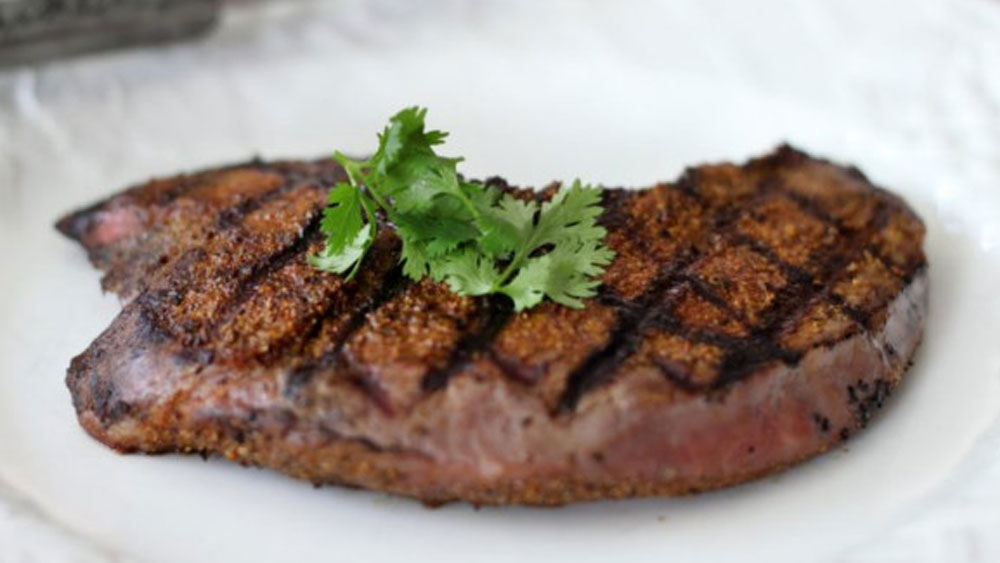 Sirloin tip steak is a lean cut, which means you’ll need to marinate and slice it thin and/or cook it slowly to tenderize the meat. But if you do, the results are fantastic — especially for a relatively inexpensive cut.

Think of sirloin tip steaks as an alternative to flank steak or skirt steak. It’s affordable and great in fajitas, tacos, stir fry, and sandwiches. You can use sirloin tip roasts in pot roasts and substitute it for any recipe calling for chuck roast as well.

What Is Sirloin Tip Steak?

Sirloin tip is a bit of a misnomer. It’s actually not from the loin at all, but rather from the round or rump primal located at the back end of the cow. Because the rump is a section that is used often during the cow’s life, the meat in the round primal is tougher and leaner.

And keep in mind that “steak tips” or “beef tips” are broader terms and may refer to a variety of cuts cut into cubes as opposed to exclusively sirloin tip, although you can use sirloin tip steak in many steak tip recipes.

What Sirloin Tip Steak Is Great For

Sirloin tip steak is delicious and versatile after a little preparation. You can use it in:

We also cover specific cooking methods and advanced tips after this list to help dial in your steak.

This recipe from Just a Little Bit of Bacon would be better with an advance marinade (which they mention), but if you slice it across the grain, cook it medium, and thinly slice the steak, you will still end up with a nice and delicious steak at a lower cost than many other cuts. The shallot butter is fun to make and have on hand for future steaks as well.

This is a nice well-balanced recipe for lunch or dinner from Alder Spring. While this recipe works great for top sirloin, I’d advise a reverse sear when using sirloin tip steak. Bring it up low and slow at 225° until it’s at 125°, and then pull it out and sear it on both sides to your desired temperature.

Using curry powder on steak is a good way to switch up the flavor profile, which is particularly useful for avoiding monotony if you are eating a meat-focused diet like paleo or carnivore. This recipe from our friends at Primal Palate uses cayenne, curry, garam masala, and red palm oil to whip up a delicious and lean steak.

Got your hands on a sirloin tip roast instead of a steak? Frugal Mom Eh! shows you how to roast it up to juicy perfection. The trick is an early sear to develop flavor and a low oven temp.

You’ll need to use the slow cooker version of this recipe with sirloin tip steak, but beef tips and gravy are about as homey as they get. Toss your browned sirloin tips over a bed of potatoes and butter, pour a little red wine, and enjoy the bliss of good home cooking. Recipe by the aptly named Cozy Cook.

Have a lot of sirloin tip that you want to meal prep with? Make some homemade roast beef slices for sandwiches and snacking using this recipe from It’s My Dish. Toss this on some rye with mustard and you are golden.

Since steak marinades are critical to making sirloin tip steak delicious for many recipes, here’s a great steak marinade from Whitney Bond you can use for any meal. This works well for sandwiches and when eating the steak as your main. Making Mexican? Just swap lime for the balsamic, use a neutral oil, and toss in some cumin and chili powder.

Here’s another delicious slow cooker steak tip recipe from Low Carb Yum. This one uses an herb-forward spice blend and has some clever tips on getting the right texture from your sirloin tips.

This is a no-frills perfect steak fajitas recipe from NYT Cooking. Flank or skirt are more traditional fajita cuts, but you can sub in sirloin tip steak by flattening out the cut with a meat mallet and then following the instructions like normal.

How to Cook Sirloin Tip Steak

Here are four basic approaches to cooking sirloin tip steak. Every one of these can be improved by using a meat mallet and/or marinating the steak in advance, and don’t forget to follow the rest of the tenderizing tips we give in the next section.

Heat a cast iron on medium heat and pre-heat the oven to 225°. Water should sizzle and dance across the pan when it’s hot enough. Sear the steak for 1-2 minutes until a nice dark brown crust forms and then transfer the steak to the oven. Cook until the internal temperature is five degrees below since the steak will continue to cook for a bit. I like to take it out at 135° for medium.

Get a cast iron ripping hot, sear it for a minute or so on each side until a dark crust forms, and then drop the heat to medium-low and cook it another 2-3 minutes depending on the thickness. Use a thermometer to dial it in, and remove it from the heat once it reaches the right temp. Any higher and this cut will backfire.

Similar to the sear method, get a ripping hot part of your grill and a medium-low section. Sear them on the hot side for a minute or two on each side and then transfer to the medium-low side until your desired temperature.

This is more for sirloin tip roasts instead of steaks, but all you need to do is prep your rub or sauce and drop the roast on top of potatoes on low for 8-10 hours. It’s that easy.

How to Make Great Sirloin Tip Steak Every Time

In a word, tenderize. Regardless of the type of meal you are making, sirloin tip steaks are lean and can be chewy if not cooked properly. This is even more true if you’re using good grass-fed beef since the fat content is lower in naturally-produced meat.

Marinate the meat in advance

You don’t have to marinate sirloin tip steak, but if you’re making it for fajitas, tacos, or stir fry, we highly recommend it. Marinades stick to the coarse muscle fibers and help tenderize meat before searing. Marinate it for either under 45 minutes or longer than 3 hours, ideally overnight.

You can mix and match whatever ingredients you want for your marinade, just remember to always use salt and that the more acidic your marinade, the shorter time you’ll need. If you leave it in the marinade for too long, acids will denature the proteins and turn them mushy.

Cut the steak across the grain

The grains in steaks are the muscle fibers that line the cut. By cutting across them, you snap them like rubber bands, resulting in a much more tender bite. This is one of the secrets to getting tender meat.

Cut the steak into thin slices

Tougher meat also lends itself to thin slices. For sandwiches, slice as thinly as you possibly can. For fajitas, rice bowls, and tacos, you can slice thinly but leave a little thickness to retain texture.

Overcooking sirloin tip steak is a recipe for toughness. That’s the quickest way to ruin a meal, unless you overcook them in a slow cooker, which isn’t the worst. The reason why this meat suffers from overcooking is because of its leanness. Without much fat, you are working with limited moisture. Keep your sirloin tip steak below medium (145°) for best results.

Let the meat rest before slicing

Another golden rule of steaks is letting the meat sit after it is done cooking. The meat will rise by about 5 degrees after you take it off the heat, and letting it sit preserves moisture. If you cut too soon, all of the delicious juices will spill out of the meat. By letting it sit, you give time for the protein strands to relax and reabsorb the juices, creating better bites.

Use a meat mallet when flattening fits the recipe

If you’re using sirloin tip steaks for something like sandwiches or tacos, use the flat end of a meat mallet to tenderize the meat before cooking. This is just another way to squeeze out a bit more tenderness. All of these small steps add up!

Where to Buy the Best Sirloin Tip

We take pride in being extremely careful with the farmers we work with. Every cow that goes through our shop is fed an exclusive diet of fresh grass — all the way to the end. Plus, we only work with farmers who prioritize sustainability and use innovative farming techniques that are keeping us and our world healthy.

To see what real grass-fed and grass-finished beef raised on the best grass in the world tastes like, check out our sirloin tip steaks.

Regardless of the recipe you choose, make sure you are treating this delicious but tough meat with care, and keep an eye out for recipes that mistake sirloin tip steaks for top sirloin or other more tender cuts.

It takes a little love, but the results are worth it. You can sub sirloin tip steaks for hangar, skirt, or flank steaks and sirloin tip roasts for rump, chuck, and brisket point.