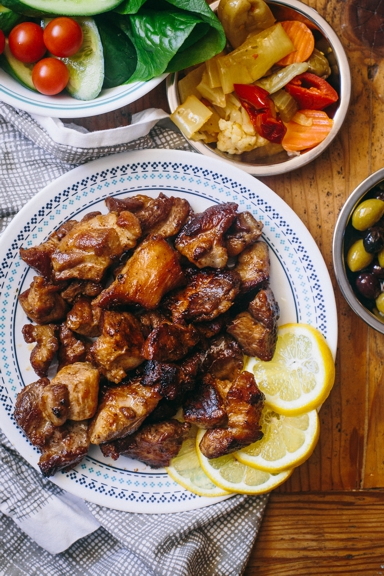 Shawarma is thought to originate in the Middle East, specifically Turkey and describes the process for preparing meat. Traditionally, meat was skewered and turned on a spit over an open fire. It’s one of the oldest known methods for cooking. The rotisserie has become the modern day equivalent. Slow cooking meat while rotating over heat allows it to cook evenly.

Shawarma can be used with lamb, chicken, beef, pork or more exotic meats. The boneless meat is sliced or diced into kabobs and skewered.

When the method made it’s way to Greece it transformed into gyros. Shawarma, gyros, and kabobs have become a common street food in many parts of the world. For home chefs, it’s a wonderful way to prepare a variety of flavors together by alternating meats. We think there should definitely be more meats on sticks.