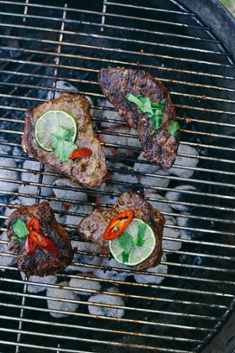 Pulehu is a Hawaiian cooking method, which translates to “roast over hot embers”. This method was traditionally used for items like breadfruit, but today it’s most associated with steak, typically seasoned simply with ginger, garlic, salt, pepper, and a bit of sugar. 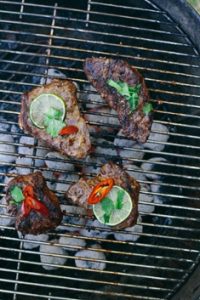 Thanks to Russ Crandall for this recipe. Check out his website The Domestic Man where you’ll find gluten-free and Paleo-friendly recipes posted every Tuesday. Russ changed his diet in 2010 and it had a profound effect on some serious health issues. He has since worked as a contributor to Food & Wine, Yahoo! Food, and AOL.com’s Kitchen Daily; his recipes have also been featured in People Magazine, The Huffington Post, BuzzFeed, and Mashable. His website was a finalist in the 2013 Saveur Best Food Blog Awards. His debut cookbook, The Ancestral Table: Paleo Recipes for a Traditional Lifestyle, was released in 2014, and a second cookbook, The New York Times-bestselling Paleo Takeout: Restaurant Favorites without the Junk, was released in 2016.