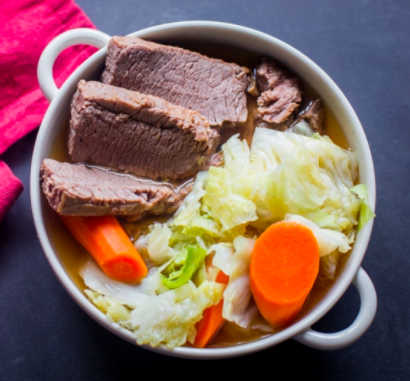 As our regular readers know, we’re big fans of Russ Crandall (better known to many as The Domestic Man–check out his blog, he posts a new recipe every Tuesday). In celebration of St. Patrick’s Day, he created a recipe for Pressure Cooker Corned Beef and Cabbage, featuring our very own Corned Beef Brisket.

The corned beef I used for this dish was this uncured corned beef brisket from US Wellness Meats. Because it is traditionally preserved (without the use of sodium nitrite), it doesn’t have the pink color that we’re accustomed to when we think of modern corned beef. But fear not – it tastes just as good as what you’d expect.

The term “corned beef”, as you have probably guessed, has nothing to do with corn. A logical conclusion would be that it is seasoned with peppercorns, but that’s not the case, either. The secret is that in medieval times, “corn” was a description of salt when in a large-grain form. So really, it just meant salted beef, which is a process that has been around for thousands of years. The specific term “corned beef” is traced as far back as the 11th century in Ireland (600 years after St. Patrick was around, by the way). The concept of eating corned beef and cabbage (sometimes referred to as New England Boiled Dinner) on St. Patrick’s Day is a mostly American concept; a more appropriate Irish dish to enjoy on St. Patrick’s Day would be Colcannon.

1. Add the brisket to the Instant Pot; add the broth, bay leaves, cloves, peppercorns, mustard seeds, and liquid smoke, then add enough water to just nearly cover the brisket. Cover and set to “Meat/Stew” under high pressure for 55 minutes. Once finished, allow it to depressurize naturally, about 15 minutes, then remove the cover. As it depressurizes, cut up the cabbage, carrots, and potatoes if you’re using them.

2. Transfer the liquid from the Instant Pot into a stockpot, pouring the liquid through a strainer to catch the peppercorns, cloves, and bay leaves. Keep the beef in the Instant Pot, cover it, and turn it off; it’ll stay warm as we prepare the vegetables. Add the carrots and potatoes to the liquid in the stockpot and bring to a boil over med/high heat; once boiling, add the cabbage, reduce heat to low, and cover. Simmer until the vegetables are soft, about 20 minutes, then taste and add salt if needed.

3. Slice the brisket and serve with the vegetables and broth.

** This cooking time will allow for tender meat that’s still sliceable. If you want it falling apart, increase the pressure cooking time to 65 minutes.

** Looking for a creative use for leftover corned beef? Don’t worry, I’ve got you covered – there is an awesome (and exclusive) recipe for Corned Beef Hash in my eBook, The Safe Starch Cookbook.