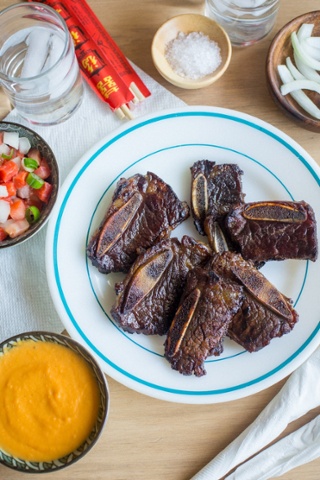 Pipikaula, like many dishes in Hawaii, is the result of several cultures colliding. First, let’s talk about how beef became part of the Hawaiian diet, since cows are not native to the islands. In 1793, famous British Navy explorer George Vancouver gifted King Kamehameha I (the chief who first united the Hawaiian islands) a bull and five cows; the king placed a kapu (Hawaiian taboo) on the hunting of these cattle and their descendants that lasted through 1830; by 1845 there were an estimated 25,000 feral cattle on the big island of Hawaii.

John Palmer Parker, an American who allegedly first arrived in Hawaii in 1809 by jumping off of a ship (there’s probably a good story there), quickly gained the favor of King Kamehameha I upon his infamous arrival. In 1815, after a bit of travel, he returned to Hawaii with a state-of-the-art American musket; the king gave him the honor of hunting the first cattle in Hawaii. Over the next 20 years, he helped to thin the number of feral cattle on the island, and was gifted some land as compensation. Parker founded Parker Ranch in 1847, one of the oldest and largest ranches in the United States, with 250,000 acres that remain today.

To help manage livestock, Parker brought in cowboys (Vaqueros) from present-day California (Mexico at the time); these cowboys were called Paniolo (a Hawaiian pronunciation of the word “Español“), and the name sticks today. The Paniolos would dry strips of beef in the sun, to chew on while driving cattle; this food was eventually named Pipikaula (literally “beef rope”). To flavor the beef, they would use soy sauce, as it was locally available thanks to Chinese and Japanese immigrants.

So that’s how Pipikaula came to be, through a joining of Hawaiian, British, American, Mexican, Chinese, and Japanese cultures. Today, Pipikaula is served in Hawaiian restaurants and sometimes at luaus. It is commonly dried in wire boxes in the sun, or by hanging it to dry, then broiled or pan-fried before serving. The recipe that I’m sharing today is modeled after my wife’s favorite Hawaiian restaurant, Helena’s Hawaiian Food, on N. King Street in Honolulu. For efficiency’s sake, we’ll dry the beef in an oven and pan-fry it to a crisp. (Read the original post, with more great photos at The Domestic Man.) 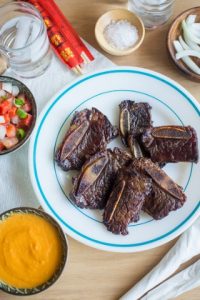 Thanks to Russ Crandall for this recipe. Check out his website The Domestic Man where you’ll find gluten-free and Paleo-friendly recipes posted every Tuesday. Russ changed his diet in 2010 and it had a profound effect on some serious health issues. He has since worked as a contributor to Food & Wine, Yahoo! Food, and AOL.com’s Kitchen Daily; his recipes have also been featured in People Magazine, The Huffington Post, BuzzFeed, and Mashable. His website was a finalist in the 2013 Saveur Best Food Blog Awards. His debut cookbook, The Ancestral Table: Paleo Recipes for a Traditional Lifestyle, was released in 2014, and a second cookbook, The New York Times-bestselling Paleo Takeout: Restaurant Favorites without the Junk, came out in 2016.