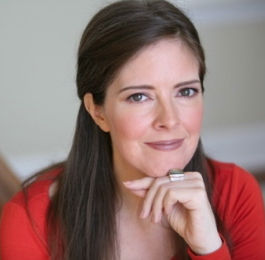 AUTHOR: Kat James
We’ve all heard “you are what you eat.” But if emerging research is any indication, it might even be more accurate to say “who we are is what we eat.” It turns out, what we take in—whether food, liquid, pill, or even microbes—is highly influential in both our moment-to-moment moods and even our long-term behavior patterns, self-perceptions, family legacies and success in life. It can orchestrate (or prevent) the playing-out of inherited or acquired predispositions to everything from motivation and outgoingness, to compulsiveness, schizophrenia, and more. In fact, what you’ll learn here might make you view yourself or your loved ones with more compassion. And tools for change.

Neurochemicals and Personality: The Pleasure Principle
Every mood—even if it’s in response to a real situation—is moderated by major neurotransmitters including monoamine oxidase (MOA), epinephrine, norepinephrine, serotonin, and dopamine. All are profoundly influenced by nutrition. In the 1980s, neuroscientist Kenneth Blum’s research team described human pleasure mechanisms which motivate survival behaviors like eating and sex, and how nutrient depletions along with genetic influences could cause “reward deficiency syndrome” (short-circuits in pleasure response) that are seen in depression, anxiety, sleeplessness, anti-social, addictive, and even criminal behaviors. These neurotransmitter dysfunctions can influence food, drink, and other choices. Blum identified amino acids, B vitamins, and other nutrients that help restore these functions, often normalizing mood and cognitive issues, and relieving the drive to use alcohol, psyche drugs, painkillers, or other band-aid “fixes.”  Enlightened addiction clinics often utilize these nutrients to actually heal brain chemistry by giving them intravenously to addicted and psychologically-distraught patients, with success rates up to fifteen times greater than those seen in twelve-step programs.

The “Gateway Drug” to Unhappiness and Insanity
Of course, the most prevalent legal drug that can create not only the above imbalances, but virtually all negative behaviors (and health decline) is sugar in its infinite natural and unnatural forms—both of which can cause the same type of post-meal “sugar crash” correlated with everything from phobias, self-isolation and suicidal thoughts, to rage, and violent crimes. Virtually all addicts, including 97% of alcoholics (and yes, alcohol is sugar), are hypoglycemic. One study found 74% of schizophrenics where hypoglycemic. Again, natural sources such as grains, starchy vegetables, and sweet fruits can cause hypoglycemia episodes in metabolically-compromised people who now make up nearly half of the U.S. population.

Bugs and Behavior: Fascinating New Science
The bacteria in our gut outnumber our own cells nearly 10-fold. Beyond their well-known digestive and immune-stabilizing impact are stunning new discoveries regarding their impact on mood and behavior. The NIH’s Human Microbiome Project, launched in 2007, has resulted in game-changing findings that our bacteria not only synthesize the same neurochemicals that drive our thoughts and behaviors, such as serotonin and dopamine, but they also communicate with the brain via those chemicals. Imagine that!

Recent studies also show bacteria’s therapeutic effects on depression, autism, repetitive behaviors, anxiety, and more. One of the most fascinating of these studies showed that calm mice that were fed fecally-derived bacteria from anxious mice became anxious. Then the reverse happened when anxious mice were fed bacteria from the calm mice. Wow.

Leptin, the Ultimate Mood and Mind Healer
Beyond the microbiome, though recently shown to have direct impact on it, is another powerful influence on our personality: the master hormone, leptin, which—when properly functioning — has been shown to: 1) heal dopamine pathways (often resolving addiction and restoring motivation), 2) balance the sympathetic and parasympathetic nervous systems (restoring calmness, clear thinking and decisiveness, deep sleep, and digestion), 3) restore thyroid, adrenal, and sex hormone function (reviving energy, libido and countless other happiness-boosters), 4) reduce body-wide inflammation (reducing a known contributor to depression as well as all kinds of pain), 5) restore our satiety signal (halting food obsession), . 6) grows the cerebral cortex (our self-control center), and 7) have dramatic impact on our mi Any one of those aspects alone is a personality game-changer.

Harnessing leptin’s power unwittingly, back in 1990, before it was discovered, and then pioneering a unique dietary protocol over the twenty-seven years since, was the greatest key to my own unusually permanent, struggle-free transformation. My own personality today is completely different than that of the deeply troubled, over-sensitive, ashamed, self-isolating and addicted woman I was. All of my head-to-toe, hormonal, inflammatory, autoimmune, food addiction, obesity, and near liver failure issues reversed, never to return and all of those effects are now validated in the research on leptin. It’s impossible to describe the bewildering peace that came over me when my body finally achieved that biochemical tipping point. So miraculous was that new feeling that I set out to replicate, extend, then master it for myself, then for others. What took me more than a decade to figure out for myself now takes as little as three days for those I who follow my protocol to experience and master as the ultimate, life-long, body- and mind-transforming tool.

Several aspects of preparation can reduce transitional discomforts, such as dramatic yeast die-off. The bad news is that foods allowed in all other low-carb, or leptin diets I’ve seen include inevitably-abused, hidden carbs, trace sugars, starch, alcohol, and caffeine sources that prevent full leptin function recovery in metabolically-challenged people, and thus prevent the aforementioned benefits.

Along with my own, I’ve heard countless reports from “My kids tell me they can’t push my buttons anymore” to “I no longer swear in traffic” to “it’s as if my wife has had a lobotomy,” to “I was so outgoing at the last appointment, my husband and the other lawyers surely thought I was on drugs,” to “We no longer consider institutionalizing my daughter,” to “I don’t get in trouble at school anymore” (words of a seven-year old). The examples over the years are endless.

A recent client, Cathy Froncek, 57, of San Francisco, who completed one of my workshops last fall said: “After several days at the retreat I felt a sudden calmness I had never felt. Once home, I soon started noticing habitual behavior patterns about myself that no longer felt right. I started hearing myself just saying what I was needing or feeling to my husband and kids instead of being manipulative or passive aggressive. At first it was strange and we had to sort of re-learn how to relate to each other. I’ve actually become far more real and down to earth, and our relationships are much richer. At work, I’m not a control freak or micromanaging anymore. I’m so much more laid back. I laugh much more. My libido is back. And the weight and other changes have been incredible.” 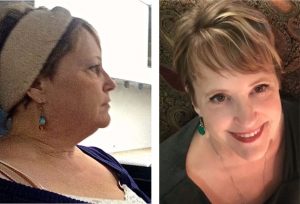 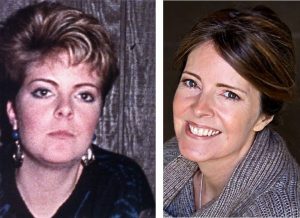 Photo caption: “Cathy’s before and after photos remind me so much of mine,” says Kat James (second set of photos), who worked with Froncek at James’ Total Transformation® Program in Hot Springs, NC.

Kat James is an award-winning author, transformational nutrition and beauty pioneer, and nationally syndicated radio host. She will be giving the morning keynote address at NAVEL EXPO in New York City, May 6th and 7th. Learn more at www.InformedBeauty.com or by calling 877-54-TOTAL