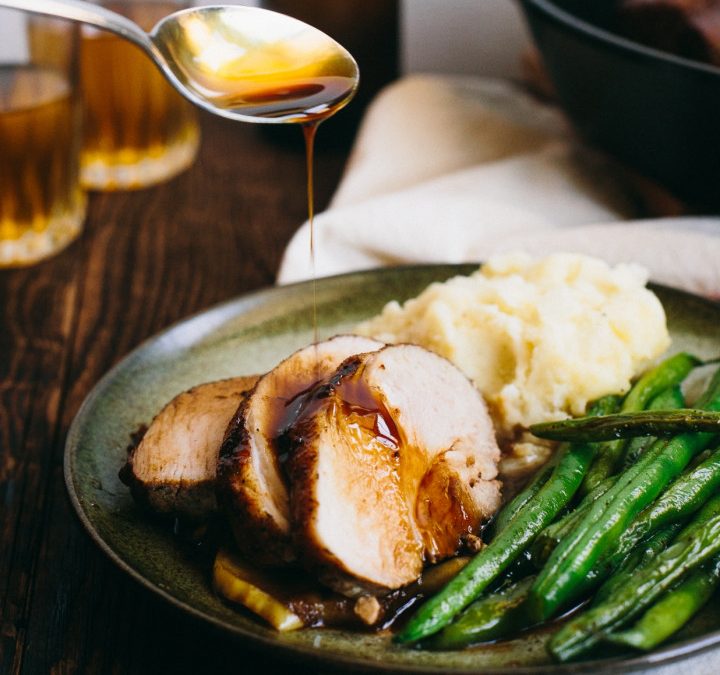 Hats off to Russ Crandall, The Domestic Man, for sharing this nutritious, mouth-watering Maple and Bourbon Glazed Pork Loin! Just in time for the holiday season.

“We’re just coming out of the stretch of what I like to call “roasting weather”, wherein I adore the comforting smells and radiating warmth of cranking on the oven. This week’s recipe capitalizes on those aromatic smells I like so much, what with its flavors of sauteed onion, roasted apple, and a sweet and tangy maple glaze. The pork isn’t bad, either!

Today’s recipe looks (and sounds) fancy, but it’s not far from many of my other dry-roast recipes: bring the pork to temperature at a moderately low heat (225F), then add onions, apple, and glaze, and finally finish everything off in a very hot (500F) oven for that perfect external texture.”

** I’ve heard some concerns about consuming bourbon, since while it is usually made from corn, it can sometimes be made from wheat, and therefore potentially cause issues for those with celiac disease. Most generally agree that the distillation process removes the gluten, there are some who still react to this liquor; in that case, be sure to use hard apple cider instead!

** If you’re looking to create a complete meal, whip up some Basic Mashed Potatoes while the pork roasts in Step #2, then cover and keep warm as you finish the pork; sauté some fresh green beans or asparagus while the pork is in its final resting stage.