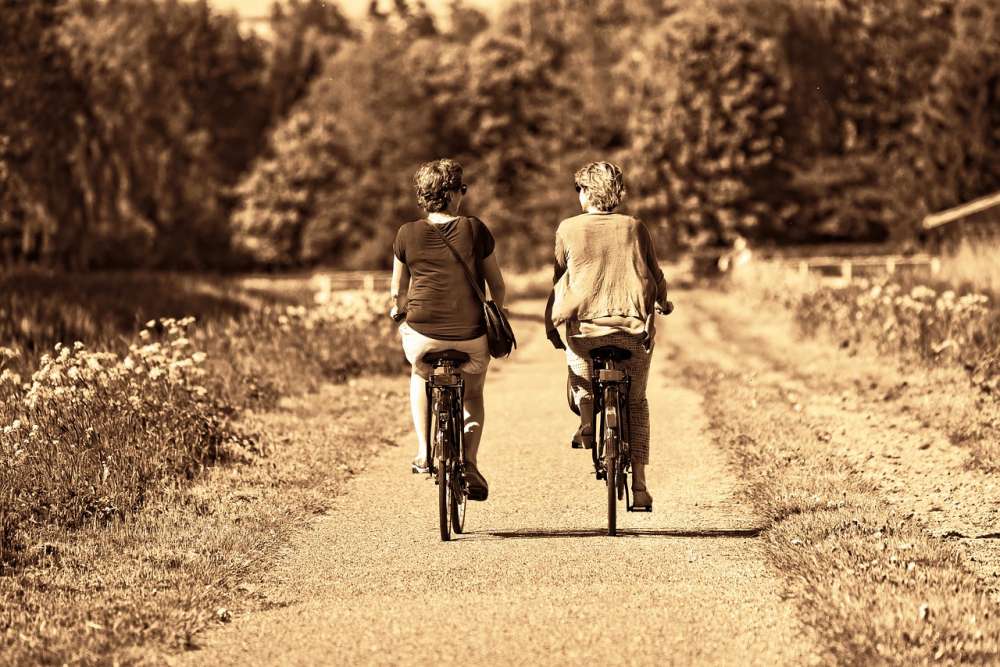 The CDC broadly defines chronic diseases as illnesses that last more than one year. In contrast to infectious diseases, the cause of chronic diseases is usually not viral infections, microbes, or other environmental pathogens. Instead, chronic conditions often develop as we age. However, we can influence them with our lifestyle and diet.

On a biological level, inflammation is often the root cause of chronic illnesses.

Behavioral factors like physical inactivity can undermine a person’s overall health and increase the risk of chronic conditions, especially in adults who do not follow proper dietary guidelines.

In this article, we will explore the link between inflammation and chronic disease to understand how factors like anti-inflammatory foods and dietary choices may improve our health, reduce the need for anti-inflammatory medication, and assist in the prevention of several conditions that are often unwelcome byproducts of aging.

When we think about inflammation, we usually envision swelling, redness, and sometimes pain or itching. On a molecular level, the body’s inflammatory processes involve signaling pathways and substances, receptors, inflammatory cells, and target tissues.

Here is how it works: Inflammatory cells detect particles and react against them by creating inflammatory substances. These substances act as a signal for the neighboring cells to increase blood flow, the permeability of the blood vessels, and the leaking of white blood cells into the affected tissue.

When your body has to sustain these processes for a long period of time, we call it chronic inflammation, and it causes progressive modifications of the affected tissues. Over time, this can degrade your health and lead to the development of chronic diseases (1).

For example, inflammation contributes to the aging brain in a process that scientists call “inflammaging,” and it may be one of the factors behind several age-related illnesses such as Alzheimer’s disease, macular degeneration, atherosclerosis, amyotrophic lateral sclerosis, and other health problems (2).

Inflammation is also a known mediator of chronic pulmonary diseases, the leading player in asthma, and an aggravating factor in rheumatic diseases like arthritis. It is also linked to increased risk for chronic kidney disease, cardiovascular disease, and several gastrointestinal problems (such as Crohn’s disease and ulcerative colitis). Inflammation is even related to metabolic syndrome, insulin resistance, diabetes mellitus, and cancer (3).

To better explain how inflammation influences the development of chronic diseases, let’s take a look at two widespread health problems that affect millions of people every year: cancer and diabetes.

Scientists have discovered that even low-grade inflammation plays a vital role in the development and progression of cancer. Cancer feeds off inflammation, so to speak, because inflammatory mediators increase the blood flow to provide nutrients to cancer cells (3). As a result, chronic inflammation may be one of the risk factors associated with prostate cancer, breast cancer, gastric cancer, and other manifestations of the disease.

Some inflammatory mediators are therapeutic when the body releases them in normal concentrations, but they start to create health problems when they are unregulated. For example, there is a molecule called tumor necrosis factor alpha (TNF-α), which has anticancer potential when secreted by white blood cells as part of the immune response system (4). However, it feeds cancer and fuels many other health issues when cancer cells release it disproportionately (5).

On the other hand, the link between inflammation and diabetes is a bit more complicated. So here is a simplified version:

As part of the body’s metabolism, a substance called the insulin receptor substrate 1 (IRS-1) plays a significant role in receiving the signal of insulin. Without it, the body becomes resistant to insulin, and the pancreas needs to release extra insulin to compensate. At some point, the pancreas would start failing due to the excessive work. Once you have reached that stage, you have diabetes.

Inflammatory cytokines from the excess fatty tissue and pro-inflammatory food trigger a molecule called suppressor of cytokine signaling 3 (SOCS-3). This molecule interferes with IRS-1, causes insulin resistance, and speeds up the progression towards diabetes.

And how did all of these health problems start? With inflammation. Or, more specifically, with inflammatory cytokines! (6), (7).

THE LINK BETWEEN DIET AND CHRONIC DISEASE

Now that we understand the relationship between inflammation and chronic illnesses, let’s take a look at some of the ways our dietary choices and nutrition affect our health and influence inflammation. From there, we can better understand how to develop strategies for prevention that will lower our risk for chronic ailments, and/or slow their development and progression.

As you might already know, some foods—particularly fruits and vegetables—have anti-inflammatory properties that offer a way to control diseases that have an inflammatory root. Examples include arthritis and inflammatory bowel disease. However, the diet we choose may also reduce the risk of diabetes, cardiovascular disease, and other chronic illnesses by reducing the systemic levels of inflammation in our bodies.

For instance, we know that unhealthy fats, combined with a diet high in carbohydrates, induces inflammatory cytokines such as IL-6, IL-1β, and TNFα (8).

As mentioned above, unregulated TNFα can speed up the progression of cancer, among other things. IL-6 is involved in many auto-immune problems, and chronic fibrosis (9), and IL-1β is involved in rheumatoid arthritis, gout, type 2 diabetes, and other serious health conditions.

The good news is that by focusing on the fundamentals of health and nutrition, and by making healthier dietary choices, you can avoid many of these inflammatory cytokines (thus reducing the risk or slowing down the progression of chronic illnesses). For example, studies have shown that lowering IL-1β also reduces the severity of associated health disorders (10).

THE ROLE OF AN ANTI-INFLAMMATORY DIET

Since inflammation is so deeply involved in the expression of these ailments, can an anti-inflammatory diet aid in the prevention of chronic diseases—or even reverse them?

I wouldn’t go so far as to refuse proper medical treatment and try to cure cancer with better food and beverage choices. But there is sufficient scientific evidence that proves the relationship between nutrition, inflammation and certain illnesses.

We know about foods with anti-inflammatory and antioxidant profiles, which reduce inflammation and neutralize the damage done by free radicals. Scientists have also demonstrated the link between several types of high-fat, high-carbohydrate meals and an increase in inflammatory and oxidative stress (8).

Thus, it is clear that our lifestyle and dietary habits directly influence the risk of developing chronic diseases in different ways, including an increase or reduction of systemic inflammation.

Examples of Food With Anti-Inflammatory Properties

Resveratrol is an antioxidant and anti-inflammatory molecule found in grapes and other fruits with polyphenols. We know that it reduces the formation of free radicals, the concentration of TNFα in the blood, and the expression of several inflammatory mediators (11). Another example is pomegranate, which reduces inflammation in the cartilage tissue (12).

The two fruits mentioned above are merely examples of those with anti-inflammatory substances that may benefit health and assist with disease prevention. There is no reason to load up on any specific type of food. Instead, find a healthy diet that works for you and stick with it. For me, that’s the Paleo diet; it worked for our ancestors for millions of years, and its primary purpose is to avoid foods with inflammatory properties.

Specifically, the Paleo diet improves health by removing excess sugar, dairy, refined vegetable oils, and processed foods—all of which scientists have shown can increase inflammation. (It can also help reduce high blood pressure, which researchers believe may interact with inflammation in negative ways.) A plant-based diet can also promote health and aid in chronic disease prevention.

As we have learned, there is an undeniable connection between our dietary choices and inflammatory pathways. We also know about the link between inflammation and chronic illness.

Looking at statistics from the CDC, we can see that the rate of chronic illnesses has increased dramatically over the past few decades. At the same time, our food choices have deteriorated, and the food we eat has little in common with what our ancestors used to eat: fresh veggies, nuts, seeds, seasonal fruits, seafood, and lean meat.

So it’s no stretch to imagine that the adoption of the Western diet by an increasingly large portion of the world’s population (especially by adults in developing countries), coupled with a general lack of physical activity and exercise, has had a massive impact on our overall health and well-being. Reversing this trend is an important aspect of chronic disease control.

The good news is that it’s not too late to adopt strategies that will reduce our risk and promote better health outcomes. There are plenty of healthier options available in our modern world. Factors like staying physically active and making educated decisions about the food you consume will reduce the risk of obesity, contribute to disease prevention, and help you achieve long-lasting benefits for your health and overall quality of life.

Michael Kummer was born and raised in Austria. I speak German, English, and Spanish. Since moving to the U.S., I have lived and worked in the greater Atlanta area. In my twenties, I was a professional 100m sprinter. These days I do mostly CrossFit. I’m a technologist and Apple fan. I love science and don’t believe anything unless there is proof. I follow a Ketogenic Paleo diet and intermittently fast every day. I’m married and have two trilingual kids. My goal with this blog is to share what I learn so that you can spend time on something else. Check out my latest Diet, Fitness, and Technology articles.