How Long to Boil Sausage (+ How to Cook It Perfectly) 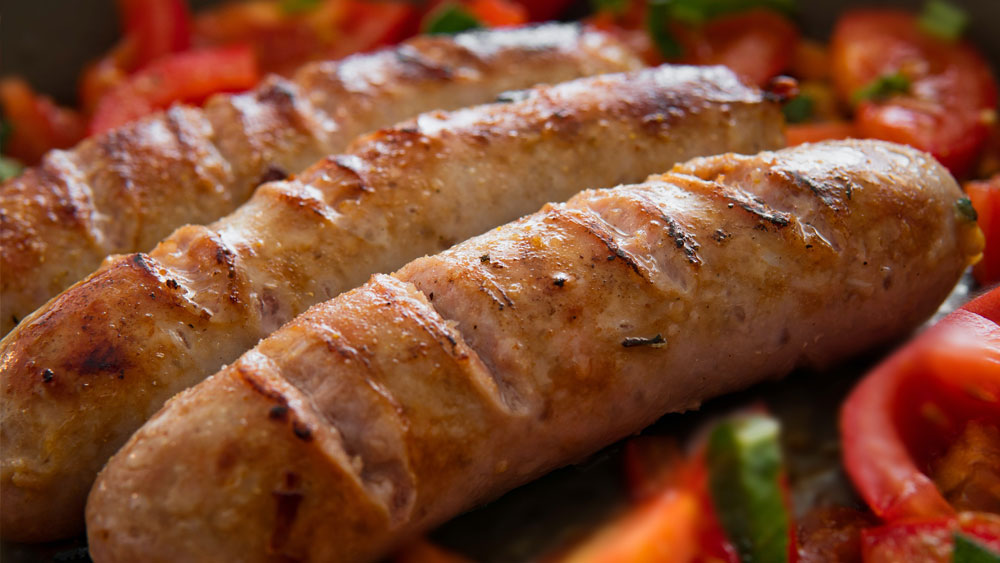 Sausages are the perfect accompaniment to any cookout, dinner party, or hearty Sunday breakfast. They’re rich, filling, and serve as the backbone of so many delicious dishes, and there’s nothing better than a perfectly cooked sausage.

If you’re planning on using them in a dish or finish them by grilling, boiling is a great way to go. Boiling doesn’t require extra cooking oils and can be done in any pot you have, which helps reduce the fat content and cleanup.

Here’s how to boil a perfect sausage!

How to boil a sausage perfectly

Before we get to the specific steps, here are a few tips for getting the best boiled sausage:

Step 1: Poke holes in the casing if desired.

This allows the fat to escape into the water and helps prevent the casing from splitting open entirely when boiling them. If you’d rather have more flavor and don’t care about the extra calories, then you don’t have to poke any holes! Some people will want less fat, others may want all they can get.

Water, stock, or cider are all good choices. You can let the dish you’re using them in dictate your choice.

Step 3: Once the water is boiling, add your sausages.

Make sure you start your time right after you drop them in!

Step 4: Turn the heat down to a strong simmer and boil for ~10 minutes.

The timing will depend on the size of your sausages. Keep an eye on them for when they turn completely gray and always check their temperature before serving. They need to be above 160 degrees Fahrenheit or around 70 degrees Celsius.

Step 5: Remove and pat them dry.

Step 6: Throw them on the grill or a skillet for an extra bit of char flavor.

How you finish the sausage is up to you, but we love to throw them for just a few seconds on a searing hot grill or cast iron. This is the best way to retain the moisture from the boil while still getting that lovely char. It’s the same idea as reverse-seared steak!

How long should you boil sausage?

That depends on the size of the sausage, but between 8-12 minutes is the usual range. Use a meat thermometer to make sure it’s between 160 and 165 degrees Fahrenheit to make sure.

How do you know when sausages are done boiling?

Boiled sausages tend to turn grey, but the only sure way to tell is by taking their temperature.

Is a little pink in sausage OK?

That depends. Some sausages stay a little pink even when cooked, but you should really use a meat thermometer to make sure your sausages have been cooked all the way through. Boiling them and then searing them will also help reduce pinkness.

Should I boil sausage patties?

While you certainly can, it’s not our favorite way to cook patties. Grilling and baking work well with patties since they’re already so thin.

Can you boil sausages from frozen?

Yup! We recommend letting them thaw out a bit beforehand to ensure even cooking, but if you do go straight from the freezer make sure you allow some extra time since it will take longer to cook through.

Should I boil sausages before cooking?

In most cases, we think boiling sausages before searing them gets you the best combination of moisture and texture. It also prevents having a seared skin and an under-cooked inside. You don’t have to worry about over-managing your grill or pan to give your sausages enough time to cook all the way through either — all you have to do is sear them and toss them into your dish!

Arguably yes, but it’s difficult to measure and ultimately not of much significance in your counts. Because of osmosis, water will naturally work toward a salt equilibrium, but unless you tested the salinity of the water before and after and accounted for many other variables during the process, you will have a hard time getting an exact measurement.

While very similar, boiling and poaching come down to the temperature you keep the water at. You can think of poaching, simmering, and boiling as three consecutive temperature ranges of the same cooking process[*]:

There are few foods as hearty as sausage-based recipes. Here are a few of our favorite ways to use boiled sausage.

A good gumbo is well worth the effort, and nothing goes better in gumbo than fresh, sustainably-sourced sausage. This recipe from the New York Times strikes that perfect balance between effort and payoff. Pro tip: Someone from New Orleans once told me to wait until your roux is the color of a Hershey’s chocolate bar. Use that as a guide!

If you whip up some of Food.com’s Italian Sausage hoagies at your next game day, you will be the star. Hoagies are simple, and simple recipes bank on having the best ingredients available. The better the meat and the fresher the vegetables, the better hoagie you’ll have. Sometimes the best meals are as simple as it gets.

For something easy on a weeknight, give this sausage pasta from Allrecipes.com a shot. You can use this as meal prep for 3-4 days, and it barely takes any time at all to whip up. Try an Italian spice marinade to really give this pasta a kick!

Taking the time to caramelize a few onions is an easy way to up your sausage game. This recipe from Salt Pepper Skillet isn’t complicated but when executed correctly is so homey and delicious.

This camping-friendly recipe relies on potatoes, carrots, sausage, and aluminum foil. Next time you take the tent out, you should give this recipe from Taste of Home a shot!

Boiling sausage is a good idea from both a nutritional and taste perspective. You have a lot of choices when you boil sausage, so whether you want to grill them up or toss them in pasta, it’s the best way to retain moisture while still getting the texture you want.

In general, you should shoot for boiling sausages for around 10 minutes and keep them at a healthy simmer. Always measure the temperature of your sausages to make sure they are cooked at or above 160 degrees Fahrenheit.

The best recipes deserve the best sausages. Check out our line of locally-sourced, Heritage pork products.