How A Nutrient In Salmon Helps Fight Bacterial Infections 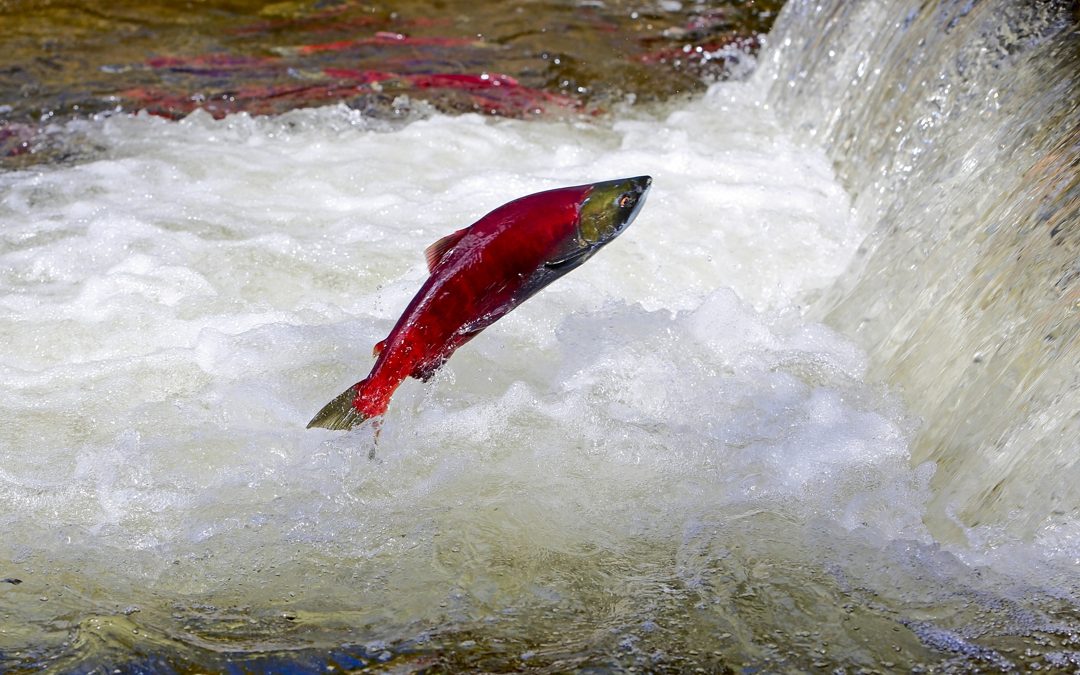 Recent data reveal a nutrient found in salmon and meat may help reduce your risk of bacterial infections.1 This is especially important considering the problems surrounding antibiotic usage. Before antibiotics, the average lifespan was 47 years and infectious diseases like pneumonia were rampant.2

While antibiotics transformed health care, they do carry some risk. For example, data show that from the years 2011 to 2015 there were 69,464 emergency room visits each year for children who had an adverse reaction to taking antibiotics.3

While these numbers sound high, some experts believe it’s the tip of the iceberg,4 since this study only included children who went to the emergency room and not those who were treated in the urgent care, doctor’s office or at home.

Scientists have also been warning that bacteria are developing resistance. In 2013, the Centers for Disease Control and Prevention published their first Antibiotic Resistant Threats Report, finding there were at least 2 million people who acquired antibiotic-resistant infections every year, with 23,000 deaths attributed to these infections.5 However, new estimates from 2019 show there are more than 2.8 million antibiotic-resistant infections each year in the U.S., from which 35,000 die.6

Other researchers believe even this estimate is too low and the true number is likely far higher.7 There are options that may help prevent bacterial infections other than drugs, including manuka honey, oregano oil, an intravenous cocktail of vitamin C, thiamine and hydrocortisone, and, as mentioned, a nutrient in salmon.8

Scientists from five institutes led by the National Institute of Allergy and Infectious Disease discovered one way your gut microbiota help protect you from bacterial infections.9 Although scientists have known there are benefits to living harmoniously with beneficial bacteria, the mechanism used to protect you has not been identified.

Researchers are seeking ways to harness your gut health to replace antibiotics as more antibiotic-resistant bacteria develop. One study published in the journal Cell10 revealed how pathogens could shape the colonization resistance process that protects you from bacterial infection.

The results showed that previous infections help enhance resistance in the gut microbiota, which was associated with altering bile metabolism utilizing the sulfonic acid taurine.

When the researchers supplied taurine, it was a sufficient trigger to generate the change in function and therefore enhance resistance. The results of the study revealed “a process by which the host, triggered by infection, can deploy taurine as a nutrient to nourish and train the microbiota, promoting its resistance to subsequent infection.”11

The bacteria involved in fighting the infection were deltaproteobacteria. There are a wide variety of gram-negative pathogens in the phylum (major group) proteobacteria, including Escherichia, Salmonella and Helicobacter.13 Further analysis led the researchers to identify taurine as a compound that triggered activity in deltaproteobacteria.

A byproduct of taurine is a poisonous gas, hydrogen sulfide. The researchers theorized that with low levels of taurine, harmful bacteria can colonize the gut. When levels are higher, it produces enough hydrogen sulfide to prevent this from happening. The researchers also found that one mild infection could trigger an adaptation to help the microbiota resist the next infection.

When the animals were supplemented with taurine, it helped support the microbiota. They also discovered when the same animals were fed bismuth subsalicylate, an ingredient found in antacids, this protection was reduced since bismuth inhibits the production of hydrogen sulfide.

The biochemical name for taurine is 2-aminoethanesulfonic acid. Although it’s commonly called an amino acid, it is a conditional compound your body does not use to create protein. Instead of a carboxyl group that is found in amino acids, taurine has a sulfide group, thus earning the name amino sulfonic acid.14

Taurine is conditional since an adult can produce it.15 However, infants are unable to produce amino sulfonic acid and thus need a diet rich in taurine to support their neurological development. The compound was first isolated from the bile of an ox, which is likely where the name came from as it is derived from the Latin word taurus, meaning bull or ox.

Amino sulfonic acid is found in high concentration in the central nervous system, skeletal muscles and eyes.17 Taurine is found in meat and other natural sources,18 including salmon, seaweed, dark chicken meat, dairy products and beef.19

Taurine levels in your body may drop in certain circumstances such as chemotherapy,20 liver disease,21 surgery, cancer, sepsis22 and diabetes.23 Since rich sources of taurine are found in meat and dairy products, people who practice a strict vegan or vegetarian diet may also be deficient.

Taurine Has an Anti-Inflammatory Effect on Your Heart

Taurine is an abundant free amino sulfonic acid and plays a critical role in several essential processes; among them is a strong general antioxidant activity.24 Amino sulfonic acid is found in higher concentrations in body tissues exposed to elevated levels of free radicals and oxidants.

This has suggested to researchers that taurine plays an anti-inflammatory role. The reaction with hypobromous acid produces a byproduct with anti-inflammatory properties. The anti-inflammatory effect has a known influence on diabetes and has demonstrated benefits on the cardiovascular system, potentially by inhibiting the renin-angiotensin system.25

This system has an influence on a variety of tissues and cells and is targeted by pharmacological interventions to help manage high blood pressure, heart failure and diabetes.26 According to researchers, nearly 50 years ago it was discovered that a taurine deficiency in cats led to retinopathy and could trigger cardiomyopathy in dogs and cats.

Data show that populations of people who eat more meat than seafood have higher death rates from heart disease. Since seafood has higher levels of taurine than meat, it suggested that amino sulfonic acid may play a role in protecting the cardiovascular system.

Research has found a correlation between taking taurine supplements and a lower risk of CVD in an animal model. In the lab, scientists observe a direct vasorelaxation when taurine is administered to a thoracic aorta in an animal in a dose-dependent fashion. Since it also plays a role in osmoregulation, it has been proposed the vasorelaxation occurs through this pathway.

Further studies have demonstrated taurine exhibits an anti-apoptotic effect on heart cells under ischemic conditions, protecting the heart cells when there is a lack of oxygen. This was demonstrated in an animal model when comparing the heart damage with and without taurine supplementation 30 days after a coronary artery occlusion.

In one animal study, researchers testing the heart muscle found that a taurine deficiency impaired energy metabolism and reduced ATP generation.27 The findings supported the hypothesis taurine deficiency starves the heart of energy, suggesting that supplementation could benefit patients who have heart failure.

Just like the heart muscle, taurine plays a role in ensuring proper function and protecting against damage in your skeletal muscle.28 The combination of osmoregulation, membrane stabilization and regulation of intracellular calcium concentration may play a role in muscle performance.

Evidence appears to support a link between alterations in taurine levels within skeletal muscle and conditions such as muscular dystrophy and atrophy.

Lab, animal and human studies also demonstrate the role it plays in the immune system related to the antioxidant properties to protect tissue against inflammation, which researchers believe29 “give[s] support to consider taurine and taurine derivatives as potential drugs in human medicine, including infectious and chronic inflammatory disease.”

Taurine supplementation may help reduce the potential risk for complications associated with diabetes30 and may help prevent the onset of the condition. The uptake of taurine by pancreatic cells decreased the pancreatic intracellular insulin levels, suggesting to the researchers that it plays a role in regulating the release of insulin from the pancreas and could reduce elevated blood glucose levels.

Since taurine plays an essential role in the production of bile salts, which help break down fatty acids, it’s essential to metabolism and digestion.31 It is also found in high concentrations in the retina.32 Recent data demonstrated that deficiency triggered by the antiepileptic drug vigabatrin is involved in the retinal toxicity experienced by patients. This led to further investigation:33

“… suggesting that this compound may be involved in the pathophysiology of glaucoma or diabetic retinopathy. Along with other antioxidant molecules, taurine should therefore be seriously reconsidered as a potential treatment for such retinal diseases.”

Taurine also plays a role in your central and peripheral nervous system. In 2017, a review published in Birth Defects Research noted supplementation helps to promote the proliferation of brain cells required for long-term memory storage.34

An animal study showed supplementation with taurine may improve Alzheimer-like learning and memory deficits35 and seems to play a role in the development of epilepsy and autism.36

Wild-caught Alaskan sockeye salmon is rich in omega-3 fatty acids. People with the highest levels of omega-3 fats have lived 2.22 more years after age 65 than those with the lowest.37

Salmon is also high in B vitamins38 that are important for energy production.39 Phosphorus and magnesium, important for bone health, are found in salmon, as is astaxanthin, which is an anti-inflammatory antioxidant beneficial for your heart and immune system.40

However, it’s important to steer clear of farmed and genetically altered salmon and instead seek out wild-caught Alaskan sockeye salmon. Unfortunately, two-thirds of the salmon in the U.S. is imported, mostly from industrial fish farms and processing factories.41

According to the Organic Consumers Association, farmed fish are raised on a diet of processed feed that can include genetically engineered soybeans and pesticide residues, polychlorinated biphenyls (PCBs), dioxins and antibiotics.42

The toxins can accumulate in the fat of the fish. One study sampled over 2 metric tons of wild-caught and farmed salmon collected from around the world.43 They found farmed salmon had higher concentrations of organochlorine contaminants than wild-caught salmon, and European-raised salmon were significantly more contaminated than fish farmed in North or South America.

Farmed salmon also does not have the nutritional profile of wild salmon, as the farmed variety is far higher in omega-6 fatty acids. Often you can tell the difference between wild caught and farmed salmon just by looking at it.

The flesh of wild sockeye salmon is bright red, courtesy of the natural levels of astaxanthin. It’s also lean, so the white fat stripes you see in the meat should be thin. If the fish is pale pink with wide fat marks, the salmon is farmed.

Avoid Atlantic salmon as these are commonly from fish farms. The two designations to look for are “Alaskan salmon” and “sockeye salmon,” as Alaskan sockeye salmon are not allowed to be farmed. Canned salmon labeled Alaskan salmon is also a good, more affordable, option.