How a Bacterium Can Spread Abnormal Cell Growth 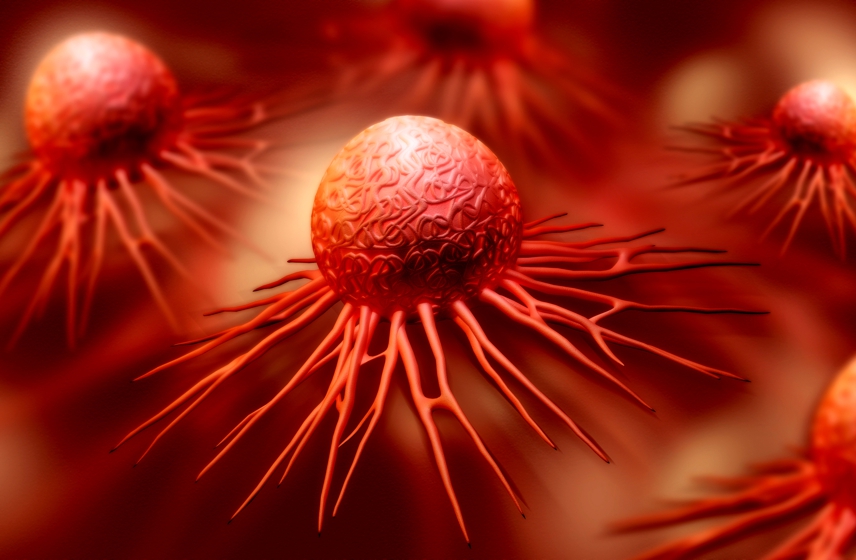 The diagnosis of cancer can trigger strong emotions of fear, anger, anxiety and sadness.1 The National Cancer Institute estimates 606,520 people will die from cancer in 2020, or 1,661 people each day.2 They also estimate there will be 1,806,590 new cases diagnosed. That is an astounding 4,949 people who will receive a diagnosis of cancer every day in 2020.

The three most diagnosed cancers in women are breast, lung and colorectal, which will total an estimated 50% of all new diagnoses. The worldwide statistics are just as overwhelming: In 2018, 18.1 million people learned they had cancer and 9.5 million died from it. Experts expect these numbers to rise precipitously by 2040, when 29.5 million will learn they have cancer and 16.4 million will die of some form of the disease.

Although many publications have stated that nearly 90% of deaths in people who die from cancer are from metastases, the leaders of one nationwide study found the percentage of metastatic deaths from solid tumors to be 66.7%.3

One Bacteria May Be Implicated in Cancer Metastasis

In the past year, three separate research teams found that Fusobacterium nucleatum plays an unexpected and an active role in the metastasis of colon cancer. The first connection was discovered nearly nine years ago when researchers found the bacterium’s DNA in colon tumor tissue.

Since then, other scientists have found that an infection by this bacterium in tumor cells raises the risk of poor prognosis, resistance to chemotherapy and metastases in colorectal cancer.4

Chronologically, the first paper was published by a group of scientists working to assess the function Fusobacterium nucleatum has on colorectal metastasis. They found an abundance of bacteria in tissue from patients with metastasis.

Based on the data, they concluded that the bacteria orchestrates autophagy to control metastasis and that targeting it can be used to devise strategies to prevent and treat colorectal metastases.5

In a second study, the researchers began with the understanding that the presence of the bacteria is associated with poor patient outcomes; however they sought to clarify whether it was involved in metastasis.6 The results from their animal study indicated that an infection of the tumor promoted migration within the body. Specifically, they found metastasis to the lungs induced by changes in genetic regulation.

In a third laboratory study, doctors used cultured human colon tumor cells and found that when the bacteria invaded the colorectal cells it induced the secretion of proinflammatory cytokines IL-8 and CXCL1.7 Both are associated with the promotion of cell migration, which is a step in metastasis.8 They concluded that the findings demonstrated a direct and indirect modulation of cell signaling and migration.9

The bacterium is supposed to help fight the cancer, but instead, it actually makes it worse. Biochemist Daniel Slade said it is “… like throwing gas on an already lit fire.”10

Microbiologists from Hebrew University reported some of the same findings from a study of breast tumors in which F. nucleatum was found in 30% of the tissue examined. Interestingly, it was most common in cancer cells with surface sugar molecules.

The infection appears to promote growth and metastasis in animal models of breast cancer. Microbiologist Gilad Bachrach told a reporter from Scientific American that “The data imply that fusobacterium is not a cause of cancer, but it can accelerate progression.”11

There Are Also Fungal Connections to Cancer

In 2011 ScienceBasedMedicine.org shamed Dr. Oz for allowing me on his show.12 One of the reasons they gave was that I had at one time published information about a novel hypothesis — that cancer may be caused by a common fungus and therefore treatable with baking soda.

Two early proponents of this hypothesis, Tullio Simoncini13 and Dr. Mark Sircus14 were unsuccessful in their attempts to get conventional medicine to take them seriously and have been maligned and marginalized for promoting the ideas.

Yet in October 2019, The New York Times15 published an article reporting the findings of a study published in the prestigious journal Nature. According to the researchers:16

“Bacterial dysbiosis accompanies carcinogenesis in malignancies such as colon and liver cancer and has recently been implicated in the pathogenesis of pancreatic ductal adenocarcinoma (PDA). However, the mycobiome has not been clearly implicated in tumorigenesis.

Here we show that fungi migrate from the gut lumen to the pancreas, and that this is implicated in the pathogenesis of PDA. PDA tumors in humans and mouse models of this cancer displayed an increase in fungi of about 3,000-fold compared to normal pancreatic tissue.”

Specifically, it was a fungal community — Malassezia — found in pancreatic ductal adenocarcinoma tumors.17 The team discovered that killing the mycobiome exerted a protective effect, which slowed the progression of the tumor. When these tumors in an animal model were repopulated with the fungus, it accelerated tumor growth. As reported in The New York Times:18

“There is increasing scientific consensus that the factors in a tumor’s ‘microenvironment’ are just as important as the genetic factors driving its growth.

‘We have to move from thinking about tumor cells alone to thinking of the whole neighborhood that the tumor lives in,’ said Dr. Brian Wolpin, a gastrointestinal cancer researcher at the Dana-Farber Cancer Institute in Boston.

The surrounding healthy tissue, immune cells, collagen and other fibers holding the tumor, as well as the blood vessels feeding it all help support or prevent the growth of the cancer.

Microbes are one more factor to consider in the alphabet soup of factors affecting cancer proliferation. The fungal population in the pancreas may be a good biomarker for who’s at risk for developing cancer, as well as a potential target for future treatments.”

An Ounce of Prevention

While the information about the role that bacteria and fungi play in the progression or metastasis of cancer is important, it is also crucial to remember that an ounce of prevention is always worth a pound of cure. Many of the small lifestyle choices we make each day have long-term effects on overall health.

One of the preventive measures your physician may recommend is a colonoscopy as a screening tool for colorectal cancer. However, it’s important to consider all the factors before undergoing the procedure, as I discuss in “Is a Colonoscopy Worth the Risk?”

A simple preventive measure you can begin at home without a prescription is optimizing your mitochondrial health. Since cancer is a metabolic disease and not a genetic one as I’ve thoroughly covered in past articles, when your mitochondria are healthy and functional your chances of getting cancer are greatly reduced.

The traditionally held view has been that cancer is a genetic disease. However, the past work of Dr. Otto Warburg, who received the Nobel Prize in Physiology or Medicine in 1931 for the discovery of the metabolism of malignant cells, tells a different story.19 He realized that cancer is triggered by a defect in cellular energy metabolism which occurs primarily in the mitochondria.20

In his time, mitochondria were not well understood. But scientists now have a better grasp of how these small powerhouses provide energy and function within the body. In 2016 we presented the Mercola.com Game Changer Award to Thomas Seyfried, Ph.D., professor of biology at Boston College and a leading expert and researcher in the field of cancer metabolism and nutritional ketosis.

As noted in my past article, “Top Tips to Optimize Your Mitochondrial Health,” Seyfried said the problem is not that physicians and researchers don’t understand the science behind the metabolic theory of cancer, it’s that accepting it would change their approach to treatment.

If defective mitochondria are responsible for the observable characteristics of cancer, then how would the disease be treated? His compilation of research from independent and well-respected scientists within various disciplines was, in my view, one of his biggest contributions to this science.

He put this work together to form a scientific foundation for the theory that cancer is a metabolic disease and not a genetic one. He believes that genetic mutations are a downstream effect of defective energy metabolism in the mitochondria and not the trigger for the development of a cancerous growth.

The idea that cancer is a genetic disease determines research funding for treatment and fuels the entire cancer industry. In 2018 Seyfried was interviewed by Dr. Peter Attia,21 who published the podcast on his site. In the interview, he provides details about the mechanics of cancer, why cancer cells grow and how conventional medicine may have gotten it wrong when it comes to treatment.

Toward the end of the interview Seyfried shared suggestions for those considering cancer treatment, such as:

Seyfried recommends using a ketogenic diet to support mitochondrial health. The mechanism of action is clear with regard to attacking cancer cells. It is based on the pioneering findings of Warburg and the nature and action of cellular respiration.

How Metabolic Therapy May Help Prevent and Treat Cancers

Seyfried’s research demonstrates that cancer growth and progression can be managed using whole body transformation from fermentable metabolites, such as glucose and glutamine, to respiratory metabolites, primarily ketone bodies that form when you follow a ketogenic diet.

In my article, “Why Cancer Needs To Be Treated as a Metabolic Disease,” I discuss Seyfried’s research in which he found that the transition reduces tumor vascularity and inflammation while enhancing tumor cell death. The diet takes advantage of the fact that cancer cells prefer anaerobic (without oxygen) fermentation to derive energy, causing an overproduction of lactic acid.

Although aerobic (using oxygen) respiration is more efficient, cancer cells behave differently than normal cells and continue to produce massive amounts of lactic acid, even in environments of 100% oxygen. This caused Warburg to conclude that the respiratory system in cancer cells is defective.

There are six strategies that top my list for helping optimize your mitochondrial health. They include cyclical nutritional ketosis, meal timing, normalizing iron levels and specific nutritional supplements. You can read about them in “Why Cancer Needs To Be Treated as a Metabolic Disease.”

In 1971, U.S. President Richard Nixon declared war on cancer and signed the National Cancer Act.23 The goal was to make a national commitment to find a cure. Since then, many chemotherapeutic and surgical treatments have been developed.

Chemotherapy has been a primary treatment used in cancer alongside the surgical resection of solid tumors. The objective of chemotherapy has been to destroy cancer cells so they do not recur.24 However, chemo, which is technically a poison, travels through the entire body and affects every cell.

Seyfried recommends a strategic approach to address cancer by cleaning up the microenvironment. This strategy is outlined in “Why Glucose Restrictions are Essential in Treating Cancer.”