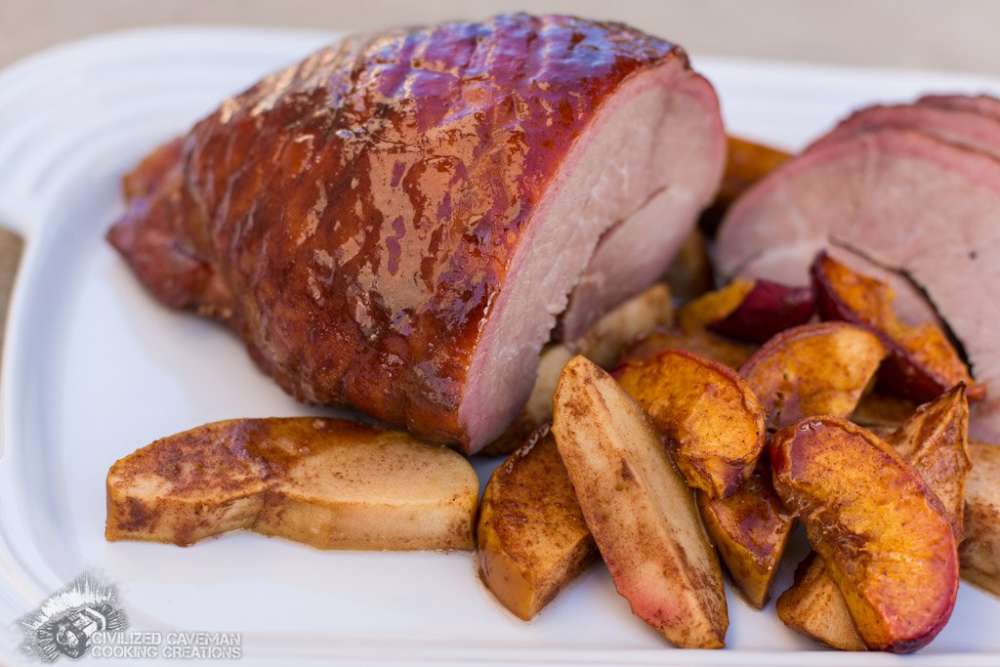 We’re delighted to share this Honey Baked Ham recipe with you from George Bryant of Civilized Caveman Cooking. With the holidays approaching and opportunities to gather and share delicious foods, this seems like the right time for this recipe. Enjoy!

“I am nothing but overly impressed with this amazing ham I got from US Wellness Meats.  Knowing it was going to be amazing (because honestly they never deliver anything less than amazing) I had to come up with a recipe that was hopefully equally as awesome.  I must say, when I was throwing this one together, I knew that apples roasted with a spice glaze would taste amazing, but I was a little nervous about the peaches. Turns out, I had nothing to fear because they were what I couldn’t get enough of.  Best part was how fresh this fruit was from the farmers market picked the day before.  I could just taste the freshness of it all. Not really, but I am going to say I could anyways.  Pretty much just because it sounds cool.  I would highly recommend you keep this recipe around and in your back pocket for any upcoming holiday, you will impress many.” – George Bryant

Thanks to The Civilized Caveman for this outstanding honey baked ham recipe!

George Bryant is a professional Husband, Bonus Dad and family man. He is also the New York Times Best-Selling author of The Paleo Kitchen and creator of the wildly popular Paleo food blog “Civilized Caveman Cooking Creations.” After spending the first 20-something years of his life in a constant battle with his weight, and then nearly losing both his legs while on deployment as a US Marine, George took matters into his own hands and began his own Paleo-journey. What started as a simple place to post recipes for friends, has since turned into an award-winning food blog. After being in the Marines for 12 years, George has since been medically separated and is enjoying working full time creating delicious Paleo recipes, while hoping to change as many lives for the better by making REAL food recipes simple and tasty.