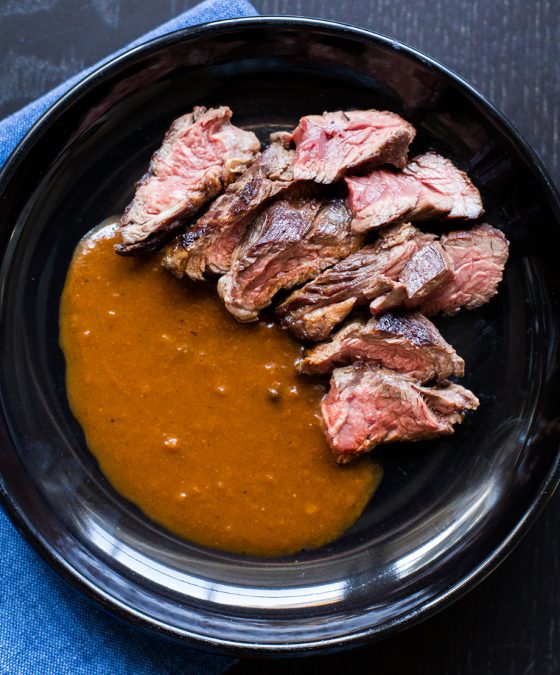 Prized for its flavor, Hanger Steak is sometimes known as the “Butcher’s Steak” because butchers used to keep it for themselves rather than selling it. Hanger Steak is an East Coast delicacy and is highly requested by US Wellness Meats’ customers.

Hanger Steak resembles Flank Steak in texture and flavor. Hanger steak works best when cooked quickly over a high heat, and served medium rare. Marinating the cut will infuse it with a punch of flavor, but it takes a little away from the spontaneity of this dish. Instead, I like to complement the simple, tender steak with a rich sauce, like the Bordelaise in today’s recipe.

There are two basic elements to a flavorful Bordelaise Sauce: demi-glace (a dark, reduced broth) and bone marrow. An excellent source of bone marrow is, appropriately, directly from marrow bones. When making broth, I tend to scoop out about half of the marrow from bones beforehand to use in other cooking adventures. It keeps for about a week in the fridge, and works well in any dish that calls for butter. If you don’t have access to bone marrow for the sauce, no worries. Simply use 1 tbsp of butter instead of the marrow, and it’ll still taste great. 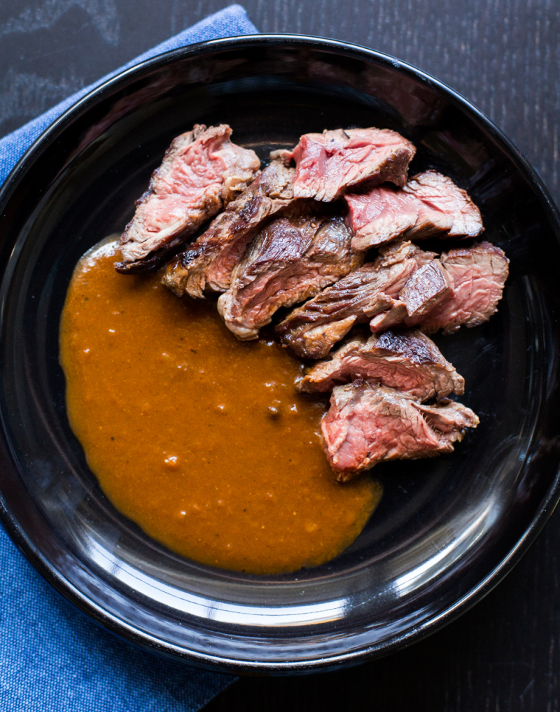 1. Season the steak with salt and pepper and set aside while we prepare the sauce.

2. Let’s make a quick demi-glace. In a saucepan, combine the beef broth and tomato paste. Bring to a boil over med/high heat, then boil rapidly to reduce until thick and dark and reduced to about 1/2 cup, about 15 minutes; stir frequently. Pour into a small bowl and set aside.

3. Reduce the heat to med/low, then add the marrow to the saucepan. Once melted, strain out any chunks of bone (if any), then return to the pan. Add the shallots and sauté until softened, about 4 minutes. Add the red wine, thyme, pepper, and demi-glace and bring to a simmer; reduce heat to low and keep warm while you prepare the steak.

4. In a large skillet, warm the ghee over med/high heat until shimmering, about 4 minutes. Gently blot away any accumulated liquid from the steak with a paper towel, then add to the skillet. Brown until dark and crisp, about 4 minutes per side, turning down the heat to prevent burning if needed. Cook to an internal temperature of 125F for Rare, 130F for Medium Rare, or 135F for Medium; test for doneness with an instant-read thermometer or the finger test. Once done, transfer to a plate and allow to rest for 5 minutes while we finish the sauce.

5. Transfer the sauce to a blender (or Magic Bullet) and blend until smooth. Pour out and discard any remaining ghee from the skillet, then add the sauce. Bring to a simmer over med/low, scraping up any browned hanger steak bits. To finish, cut the cold butter into cubes and stir into the sauce one at a time. Once incorporated, taste and add salt if needed.

** For a dairy-free option, don’t add the cold butter to the sauce. 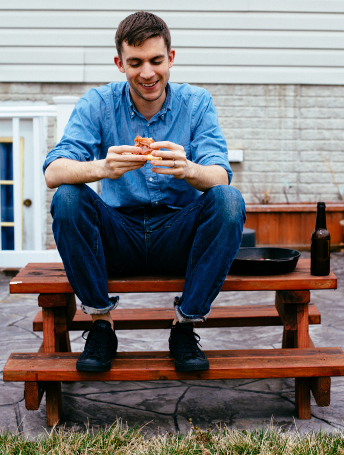 US Wellness thank you’s to Russ Crandall with The Domestic Man. At his blog, you’ll find gluten-free and Paleo-friendly recipes. His recipes focus on classic, traditional, and international dishes from a historical, linguistic, and cultural perspective.

Russ released his debut cookbook, The Ancestral Table: Paleo Recipes for a Traditional Lifestyle, in February 2014, and my second cookbook, The New York Times-bestselling Paleo Takeout: Restaurant Favorites without the Junk, in June 2015.