Gyro Meat Recipe: How to Make Gyro Meat at Home 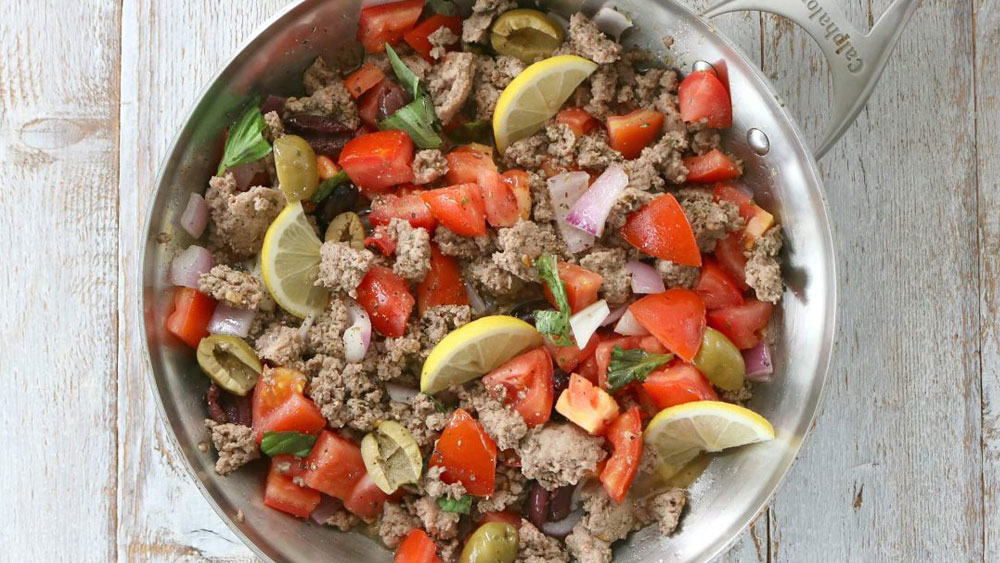 Look. I’m not going to lie and say that you can make gyro meat so good that it immediately brings you back to your yoga retreat in Santorini from 2019, where the chef’s hand-raised Lady the Lamb until she was of age and gracefully laid her down before making the most succulent lamb rotisserie in the northern hemisphere.

But… I will say that you can make some pretty great gyro meat at home. Good enough to at least wow your friends, your tastebuds, and make you miss Santorini.

We cover the basics and then get into all the juicy details. Let’s gyro!

What is gyro meat?

It spins all day next to heating coils or flames, and the crispy outside meat is shaved for each sandwich, leaving room for the newly revealed meat to cook.

But… this is where definitions break down a bit. Traditional greek gyros are actually stacks of marinated pork skewered and spun. Greek-American gyros are blended/minced meat mixtures skewered and spun like a giant sausage. This changes the texture from more traditional slices to a sort of crispy lamb meatloaf.

So you just need to choose whether or not you’re making traditional gyros or Greek-American gyros.

And while gyro meat is similar to shawarma, in Middle Eastern cuisine the rotisserie is never made with pork.

There are a lot of ways to make gyro meat, and that includes switching up the seasoning, but in general you’ll find:

What You Need to Make Gyro Meat

While having a vertical rotisserie would be awesome, you don’t have to have one to make super tasty gyro meat at home.

How to make traditional gyro meat (with a rotisserie)

Before we talk about home recipes, if you happen to have a rotisserie and want to make gyro meat in the traditional Greek style, you essentially:

Here’s a video of some guys from Greece explaining it. Just use the English subs since they are speaking Greek. This is overkill for most people, but I don’t want to ignore the cooking nerds!

How to make gyro meat at home (no rotisserie)

The debate around how to make good gyro meat at home is a spicy one, but after a lot of research, here’s what the consensus of pro chefs recommend. We’re going to list out specific recipes after this so don’t worry if these steps feel too broad.

Some of these recipes will differ from the recommendations above, but we highly recommend salting your mixture in advance, blending the meat chilled, letting loaf rest before cutting it, and broiling or sauteing the meat after you bake it — these small steps make a big difference!

This traditional pork gyro recipe from Akis Petretzikis cleverly uses wooden skewers to sub for a vertical rotisserie. It also adds in some fresh veggies that soak up all the delicious juices and make for great pita toppings.

Here’s a good recipe from Foreign Fork that gets you a great bang for your buck. It isn’t hard, but that doesn’t mean it isn’t tasty. You can sub lamb for the ground beef, mix in bacon to up the fat content — really whatever you want!

Feeling healthy? You don’t have to make sandwiches! Why not grill up some fresh lamb, tomatoes, onions? This is a great and healthy main that you can easily put on top of rice if you want to stretch it a bit longer.

Why not take the Greek-American bit and make it more American? Tzatziki tucked under a good bun and ground lamb patty makes a great lunch. They are super easy to throw together, too!

Sweet, Savory, and Steph reminds us that you can make gyros with chicken, too! If you have leftover chicken or just want a leaner alternative to lamb or pork, then give this recipe a shot.

Here are a few extra tips when making gyros:

Where to buy good gyro meat

Since gyro meat can mean pork, chicken, lamb, or any combination thereof, where to buy the best gyro meat is a bit of a broad question.

So, the trick is to find a meat producer you trust, one that raises animals the way they should be raised, avoids detrimental shortcuts like fattening animals up with low-quality feed or using antibiotics to prop up their sick animals, and prioritizes health over profits.

That could be a local butcher. It could be a farm you order directly from, or you could go the easy route and get 100% grass-fed and grass-finished meats delivered directly to your door with U.S. Wellness Meats. We’ve spent decades championing natural raising practices, and everything we sell is as good as meat can get for your body and taste buds.

What is gyro meat made of?

Traditionally marinated pork, but in America it’s usually a sausage made of lamb, pork, or chicken.

What is served with a gyro?

Can you cook gyro meat in the oven?

Just bake it at a lower temperature (around 300 degrees) to avoid spilling too many juices and cook it until it’s around 155 degrees.

Can you eat gyro meat cold?

Assuming it has been cooked before, of course!

What is the best way to warm up gyro meat?

Broiling or high heat on a cast iron is the way to go.

How long does gyro meat last in the fridge?

Treat it like any other pork, lamb, or chicken. Eating meat in the fridge within 3-4 days is the tastiest and safest!

Everyone has their opinions on gyro meat, but in the end, just about anything you try will end up being delicious — it’s grilled meat after all! Get some good pita, use fresh tomatoes and cucumbers, and make a big batch for the week or to share with friends. You won’t regret it.

Get the best meat for gyros, delivered right to your door.