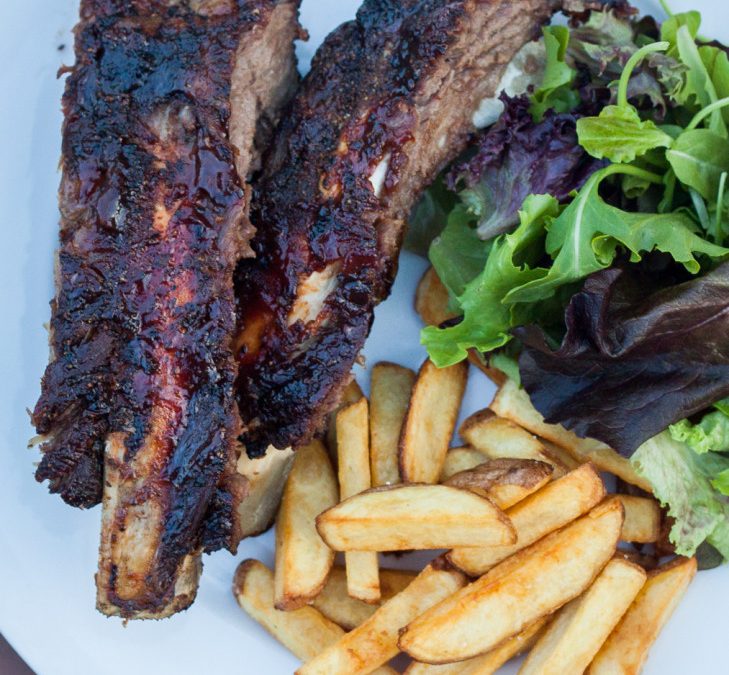 Here’s a recipe perfectly suited for family gatherings or for anyone looking for smokey, big beefy, finger-licking flavor.

“I wanted to make something that was ridiculously easy and still produced some high-quality, juicy, and tender beef ribs.” – Russ Crandall

So I turned to my dear old gas grill, and let the magic of indirect heat run its course.

Instructions for BBQ Beef Back Ribs

1. Combine all the dry ingredients, then take a pretty picture of the dry rub to show your friends.

2. Sprinkle the dry rub over both sides of the ribs and let them sit at room temperature for 30 minutes.

3. As the ribs are hanging out, take a large handful of mesquite wood chips and soak them in water for 30 minutes.

4. To get a good amount of smoke going, add the soaked chips to a smoker box and place the box under the grill grates on one side of the grill (directly under a burner). If you happen to leave your smoker box outside in the rain sometime, you’ll get a nice rusty color to it like mine! Preheat your grill for about 10 minutes, then leave only the burner under the smoke box running.

5. Place the ribs on the opposite end of the smoker box (the cool side of the grill) and cover. Adjust the burner’s intensity to get a grill temperature of as close to 265 degrees as possible. Grill the ribs using this indirect method for three hours, or until the rib’s internal temperature reaches 180 degrees.

6. After three hours, the ribs should look slightly crispy on the outside and most of the fat should have cooked off the meat.

7. Turn the burners up to medium heat and grill the ribs on direct heat for a couple minutes, to burn off the remaining fat. This should only take a few moments once the heat is going. Brush on some barbecue sauce and remove the ribs from the grill.

8. Slice the ribs into singles using some kitchen shears and enjoy!

Enjoy more recipes by Russ on the Discover Blog.