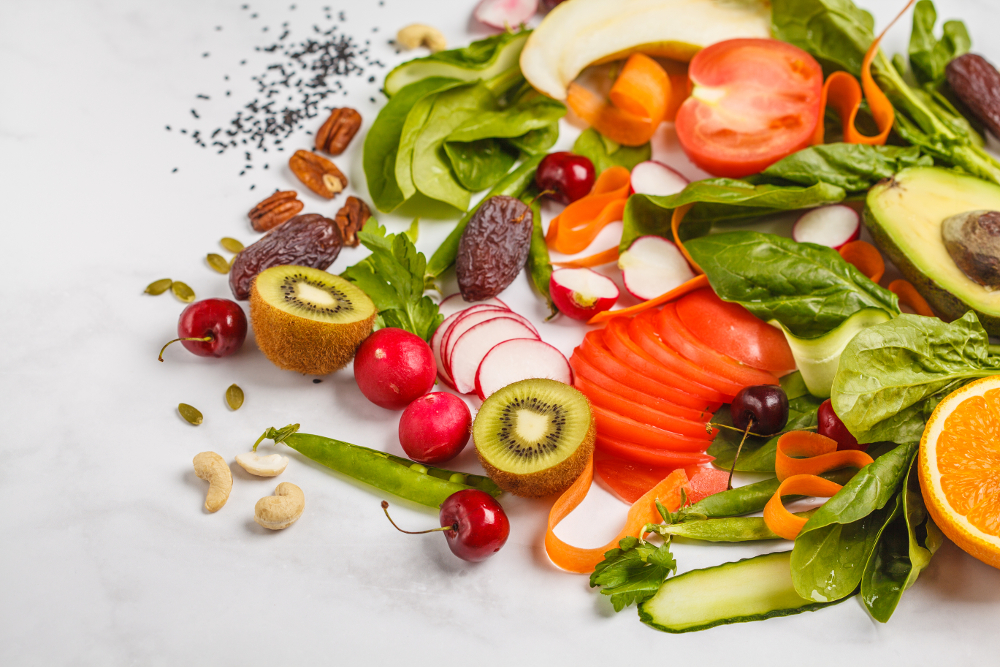 By: Carrie Forrest, MPH in Nutrition

Before you think about going vegan, you might want to learn about eight diet dangers that can result from this extreme plan.

Have you ever wondered if a vegan diet would help you manage your weight and resolve any nagging health problems? That’s the promise that is often made around this trend. I’m here to dispel the myth that veganism is the healthiest diet and works for everyone.

I Am a Former Vegan

Most of you know me as creator of the Clean Eating Kitchen website. Today, I wanted to share my thoughts on potential health issues that can result from a vegan diet. I have a masters in public health nutrition, but I’m also a woman on a healing journey, looking to find more natural and holistic ways to feel better and recover from health issues resulting from decades of eating a Standard America Diet (you can read more about me here).

My health problems in the past included:

My Introduction to Veganism

Back in 2010, I had a friend who had gone on a vegan diet because she no longer wanted to eat animals (usually referred to as an ethical vegan). This was my first exposure to a vegan diet.

I then saw Oprah interview Alicia Silverstone about her book The Kind Diet and was even more curious about the purported health benefits of going vegan. I got a copy of the book and was smitten with the idea that cutting out animal foods could potentially fix all the health problems that I was having, especially the inability to manage my weight that I learned years later was a result of undiagnosed thyroid disease.

What Is a Vegan Diet?

What is a vegan diet? Simple put, it’s one that excludes any food that comes from an animal. This includes eggs, dairy, meat, fish, poultry, and even honey. A vegan diet is often known as a plant-based diet.

Some people take a vegan diet even further and embrace it as a lifestyle, and will not purchase or use any clothing or personal care products that include animal-based ingredients.

If a vegan diet does not include any animal products, then what does it include? Vegans eat vegetables, fruits, whole grains, soy, legumes (beans), nuts, and seeds.

A vegan diet doesn’t necessarily means it’s healthy, though, since it by definition does not exclude a lot of processed foods, sugar, or gluten. A whole foods, plant-based diet is more often the term used for an approach that includes fewer processed foods, and a greater emphasis on fruits, vegetables, legumes, grains, nuts, and seeds.

A Vegan Diet is an Extreme Diet

Although some people may thrive on a vegan or plant-based diet, it should be noted that it is considered an extreme diet because of how many foods it excludes, as well as the potential for nutritional deficiencies.

This article includes eight real problems that can result from a vegan diet, including my experience as a woman whose health declined as a result of being on a strict vegan diet.

Please note, my intent with this article is not to discredit any of the benefits that can result from eating more plant foods, but to provide cautionary evidence of what can happen if a vegan diet is taken too far and warning signs are ignored.

Since a vegan diet excludes all forms of animal protein including meat, fish, eggs, and dairy, people following a vegan diet often turn to legumes as a plant-based protein source. Legumes have high levels of antinutrients including lectins and phytates, both of which can increase intestinal permeability, also called leaky gut (1).


2. Soy protein sources can cause hormone disruptions, including estrogen and thyroid hormone.

Processed soy foods are no better for human health than any other highly-processed foods, but with the added risk of hormone interference due to phytoestrogens found in all forms of soy.

3. Risk of anemia due to a lack of heme iron.

Iron-deficient anemia is the most common nutritional deficiency in the world, and both vegans and vegetarians are at higher risk of this condition (3). While plant foods contain a form of iron, it is called non-heme iron and it is much less absorbable by the body. Iron-deficient anemia can lead to serious symptoms including fatigue, and women of child-bearing age should be aware of how a vegan or vegetarian diet can quickly lead to anemia.

While iron supplements can be taken to help reverse or prevent anemia, most women dislike taking iron supplements because of negative side effects. The simple solution is to consume heme-based iron from red meat sources (always choose organic and grass-fed sources; I buy my meats from US Wellness Meats).

Without a food source of omega-3 fatty acids from fish or fish oils and an increased consumption of omega-6 fatty acid from foods like nuts, vegans might be at higher risk from depression. At least one study showed this to be the case (3).

Algae-based sources of omega-3 fatty acids are an option, but they can be expensive and hard to find. And, since many vegan diets may include a higher than average intake of nuts, the balance of fatty acids in the body can still get off-balance.

5. Risk of Vitamin B12 deficiency

Since vitamin B12 is only available in animal foods, vegans are at a much higher risk of developing a deficiency in this vital nutrient (4). In fact, most nutrition professionals agree that those on a vegan or vegetarian diet must supplement with a high-quality vitamin B12 supplement to avoid irreversible health conditions that can result from deficiency.

It should also be noted that many people have a genetic variation known as MTHFR that can impact how B vitamins are absorbed. In this case, even certain B vitamin supplementation might not be enough to prevent a deficiency.

6. Inhibition of zinc absorption on vegan and vegetarian diets

Similarly to vitamin B12, vegan and vegetarian diets can result in low zinc status. It is theorized that the problem in this case is that higher consumption of plant foods containing phytic acid may inhibit the ability of the body to absorb zinc (5).

Because of this potential issue with zinc absorption, it is often recommended by nutrition professionals that vegans and vegetarians should increase their intake of zinc up to 50% of the recommended daily allowance to ensure adequate levels.

7. Risk of consuming too much carbohydrate

Vegan diets are generally lower in protein and can cause blood sugar swings in certain individuals. There is also the risk of over-consuming carbohydrates on a vegan diet, especially since legumes are often consumed as a protein source.

Over-consuming carbohydrates can lead to non-alchoholic fatty liver disease, blood sugar disregulation, and other troublesome symptoms. Eating a diet that includes moderate to higher levels of protein has been shown to have a positive effect on satiety and weight management.

Orthorexia is a type of eating disorder that is defined by an over-fixation on healthy eating patterns. It can result in over-restriction, obsession, and other serious eating disorders.

At least one study found that vegans and vegetarians tended to display more orthorexic eating patterns, and most eating disorder specialists do not recommend restrictive diets such as veganism or vegetarianism for people trying to recover from an eating disorder such as orthorexia (7).

My Experience with Being Vegan and Moving Away from Veganism

The first year on a vegan diet was okay. I had a hard time giving up some of my favorite foods, especially dairy yogurt and eggs. I didn’t lose any weight going vegan, but I had reduced acne outbreaks once I stopped eating dairy (I am still dairy-free).

About one year into my vegan diet experiment, I started experiencing an outbreak of hives after eating. The hives were intense. One morning my eyelid was swollen shut. I thought perhaps gluten might be the issue, so I also then cut out gluten.

Around that time, I also came across a more extreme version of veganism, one that cuts out all oils, processed foods, refined carbs, and sugar. I thought maybe, just maybe, that I had found the answer to losing weight and feeling good.

One thing led to another and I was eventually diagnosed with thyroid cancer in 2012. My world came crashing down. At the time, I had been following this extreme form of veganism for almost two years and thought I was supposed to be protected from such a terrible diagnosis.

I continued on the vegan path even after my diagnosis and treatment, thinking if I just tried harder or got more restrictive, then I would be healthy. My diet got more and more restricted and I felt an eating disorder mindset start to consume me. I was always hungry, yet I wouldn’t allow myself to eat the foods that would nourish and heal me.

Finally, after careful thought and lots of fretting, I decided to stop being vegan. I wrote a blog post about not being vegan anymore and lost a lot of friends over my decision (that blog post has over 500 comments on it). Once I was immersed into the vegan culture, it made it that much more difficult to mentally make that mental shift of eating meat again. I experienced bullying and shaming when I wrote publicly about my decision.

Ultimately, I consulted with a dietitian, an eating disorder specialist, and functional medicine practitioners to recover my health and a balanced relationship with food.

Certainly, not everyone has a negative experience on a vegan diet. There are plenty of people who would benefit great from adopting certain aspects of veganism, including incorporating more vegetables into the diet, and understanding the importance of not purchasing or consuming factory-raised meat.

I eat a lot of vegan foods and still create a lot of vegan recipes, especially since I’m gluten-free and dairy-free to manage my autoimmune-related inflammation. I try to eat a variety of plant foods, while including animal protein with every meal. This is what works for me! I don’t think there is a one-size-fits-all diet, I really don’t.

The bottom line is that it’s important to be aware of the risks of extreme diets and any quick-fix approach to health. Based on my experience and exposure to the scientific literature on nutrition, a balanced diet including varying ratios of all of the macronutrients, will most often provide long-term benefits and a reduction of risk of nutritional deficiencies.

Carrie Forrest is the creator of the blog, Clean Eating Kitchen, where she shares gluten-free and dairy-free recipes and tips. She also hosts the podcast, Clean Eating for Women. Carrie has masters degrees in business and public health nutrition, but, more importantly, has used a real food diet to recover from and manage multiple health conditions including PCOS, chronic migraines, anxiety, autoimmune disease, and cancer.

Why You Should Eat Meat by Chris Kresser.