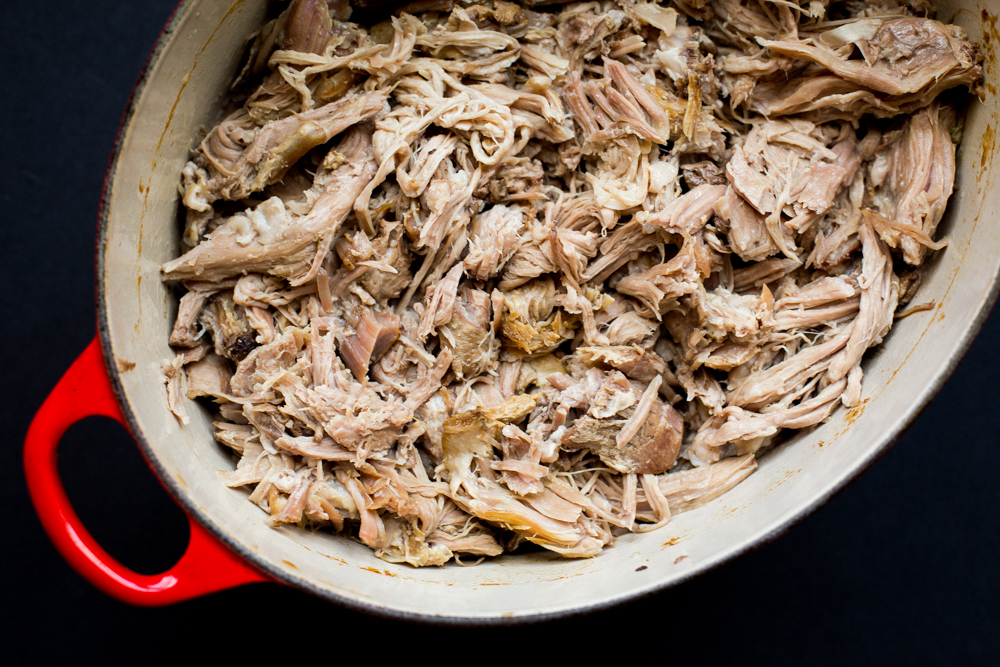 Kalua pig is one of Hawaii’s best-known dishes, and easily replicated at home. Traditionally, an entire pig is placed in an underground pit (“imu” in Hawaiian) that is lined with hot rocks and wrapped in banana leaves, then covered with a layer of soil and roasted overnight. Since we don’t have room in our back yard for an imu, nor access to a suckling pig and banana leaves, nor the desire to go through such a hassle, we just use a crock pot or french oven.

This recipe calls for about 6 lbs of pork butt, which is actually the upper half of a pig’s shoulder (the lower half is called the picnic cut, which can also be used). Pork butt is also often called a Boston butt or roast. You can also find the cut simply labeled as “pork shoulder”. Basically, any cut that’s labeled picnic, butt, shoulder or Boston should be fine.

This delicious dish is courtesy of Past Featured Chef Russ Crandall, The Domestic Man. If you’re looking for a great kitchen companion, Russ recently published his 3rd cookbook, The Heritage Cookbook with over 300 traditional recipes from every corner of the globe.

This recipe yields enough meat for six hungry people. We usually have one big meal for two and then fill two quart-sized plastic bags for freezing.

Also, you can reuse the extra liquid. The fat can be separated and used as lard, and the liquid makes a great gravy base or pan sauce to pour over any pork roast.

Additionally, leftover kalua pig is often mixed with head cabbage for leftovers. It brings a new texture to the meat and reinvigorates the dish. To do so, reheat the cold pig in a covered pan on medium heat for about five minutes, adding chopped cabbage and a little water for an additional five minutes.

Explore more of Russ’s recipes on the Discover Blog.