The Best Meat for Beef Stew 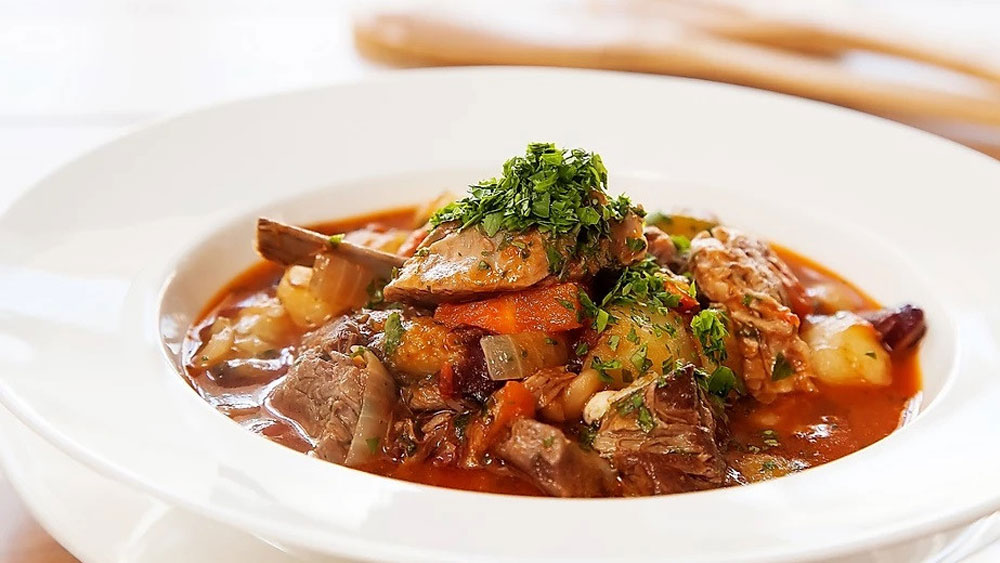 You won’t find a heartier and more homey meal than a well-prepared pot of beef stew. The rich, thick broth with tender pieces of beef and potatoes is a perfect weeknight and meal prep option during the colder months, and it’s what I whip up in my dutch oven more than anything else.

There are two great advantages of making stew: you can add just about any veggies you want to it, and the payoff is huge for the relatively little work you have to put in.

But, simplicity is not without constraints! Making some good decisions upfront with your stew will make sure it’s “melt-in-your-mouth” delicious instead of “dried-and-tough” try-again.

So, with that in mind, we’re going to cover:

What is beef stew?

Beef stew is a combination of beef and vegetables stewed in its own gravy for hours and typically served with bread.

Stew is often cooked in big batches and tends to use a combination of potatoes, carrots, celery, and onions, although any other veggies are fair game. It’s also popular to flour and sear the beef before stewing and use red wine to deglaze the pot.

With beef stew, almost anything goes. As long as you make a rich, thick broth and have beef, you’re set. And because beef stew is such a good foundation to build upon, you’ll see all sorts of worldly variations, including everything from curry beef stew to Korean beef stew.

The best cuts of meat for beef stew

When it comes to beef stew meat, the tougher and more collagen, the better. This may seem counterintuitive, but when you cook a tender piece of meat like ribeye or tenderloin for an extended period of time, the lack of fat makes the result dry and tough.

Collagen are the tough protein strands found more often in the most-used (and therefore muscular) parts of the steer. As you stew tough cuts of meat, all of that collagen dissolves and seeps throughout the cuts and into the stewing liquid itself. That means all of that delicious meaty flavor and gelatinous texture from the collagen permeates the stew.

It’s the same reason we choose briskets for smoking and BBQ — it takes time to make these cuts tender, but the result is incredible.

When going for collagen-rich cuts, this is the shortlist:

There are other collagen-rich cuts of meat, but these are the best bang for your buck with beef stew.

The most popular and economical cut by far are the chuck roasts. These come from the chuck primal, which is located in and around the shoulder of the steer. Because the steer uses these muscles constantly during its life, they are full of that delicious collagen, and their relatively cheap price makes them a standout choice.

Coming from the rump, or round primal, round roasts are another good choice for beef stew. Stay away from the eye of round, since it doesn’t have the same amount of collagen as other round cuts because it comes from the center (eye) of the rump, but the bottom and top of round roasts are both good options.

Brisket is famous for its flavor and thick, strandy texture. There are two main cuts of the brisket: the point and the flat. The flat has less fat and doesn’t break down as well, so go for the point cut (popular for its classic pot roast strandy texture). Keep in mind that you’ll get a different texture with the point brisket. It will be thinner strips instead of chunks.

Short ribs are more expensive than chuck and come from the plate primal, which is on the underside of the cow. You’re paying for bone weight here and have to pick out the bones at the end of the stew, but the result is an incredibly meaty flavor. If you aren’t in a hurry and are having what I like to call a “slow food” day, then go for this.

Similar to short ribs, you get a lot of bone weight here, but the flavor of oxtail is unmatched. You’ll have to pick out the bones and spend a little more time preparing, but it is an amazing taste that’s worth the effort.

Here’s how to make sure the stew meat you’re getting is as good as it gets.

The first rule for getting the best cut of beef for beef stew is to start with the best beef.

This won’t always be an option if you’re trying to save money, but by choosing the right beef provider, you can dramatically raise the quality of your meal.

The best beef producers use 100% grass-fed beef, avoid hormones or antibiotics, and don’t use pesticides, herbicides, or artificial fertilizers.

We were founded in 2000 in Monticello, Missouri (pop. 98) by visionary farmers, who saw that big-business cattle-raising practices were taking a toll on our animals and our health.

By returning to rotational grazing practices that are good for the planet and good for our cattle, we introduced a new generation to the unmatched taste, tenderness, and healthiness of 100% grass-fed and grass-finished beef.

If you want to see what all that quality and care tastes like, get some of our amazing stew meat shipped to your door right now.

Stew meat at supermarkets is usually a combination of trimmings and cuts, and that means they could have different cooking times, textures, and flavors. That’s not always the case with specialty producers, but with lower-quality meats, you may run into some trouble.

Stew meat is convenient, but if you want to have the best possible meal, it’s better to choose your own cuts so you have absolute control and consistency.

Just like chili, cooking stews with a combination of meats is a cool way to get a varied texture. The trick is to pick cuts that have similar stewing times and cut them up in similar sizes as best you can.

Here are some tricks of the trade from our team of pro beef eaters.

Flour and sear before you stew.

Searing your beef before you stew is the secret to rich flavor. Searing initiates the maillard reaction, which is when sugars in the meat caramelize and brown. Here’s how to get the perfect sear on your beef:

Stagger vegetables based on cooking time.

Adding in carrots at the beginning of a 3-hour stew will leave them practically dissolved in the gravy. For potatoes and carrots, aim for about half your total cooking time. For most other veggies, go for about 45 minutes out. The timing depends on the size of your slices and the types of veggies you’re using, so it may take some time to get just right!

Overcooking means mushy veggies and drier meat. Most cuts only need 2-3 hours to get perfectly tender, so keep a close eye on it after a few hours.

Taste as you go.

As your beef and veggies stew, they will pick up more and more of the flavor that the broth has, so taste your broth along the way to see if it needs more salt, pepper, wine, or vinegar!

Use your own beef stock.

Saving beef bones and making your own stock is the secret weapon behind so many restaurants’ beef stew recipes. It adds that extra bit of depth that packaged broth lacks. Grab some beef bones or save some from your next roast to take your stew to the outer limits.

Now for the tasty part. Here are five amazing beef stew recipes to get motivated.

With a name like that, how can you resist trying this beef stew recipe? The clever part of this “amazeballs” recipe is the addition of coconut milk. It won’t overpower the flavor of the stew, and it gives it this amazing sweetness and velvety texture.

If you want classic beef stew, and we mean that in the best way possible, then go with this recipe from BellyFull. By using traditional veggies, worcestershire, bouillon, and beef broth, you end up with the exact flavor you’re imagining in your head when you think of beef stew.

If you’re looking to add a bit of Indian complexity to your stew, check this curried beef stew recipe out. It uses macadamia nuts, fish sauce (sparingly!), and curry powder to take your beef stew and push it into curry land. Grab some fresh naan and cook up some basmati rice for the best results.

Just like chili, everyone seems to think their beef stew recipe is the best, but this recipe from Damn Delicious may be right. We’re always a fan of a good wine deglaze, and this recipe calls for that along with using cremini mushrooms to give some vegetable hardiness as well. You’ll love this one!

Serious Eats is usually right about most things cooking, and this beef stew recipe is no exception. If you enjoy nerding out about cooking, then this is the recipe for you. It goes into scientific detail about each aspect of the stew and adds clever umami-boosts and ingredients to import some of that extra stew oomph you’re looking for.

Over half the battle is won by the decisions you make before you step into the kitchen. If you buy from a beef provider who follows the most natural and healthiest raising practices and choose a cut based on the best practices mentioned above, then you’ll be well on your way. And if you can’t decide, go for a chuck roast!