The Best Cut of Pork for Pulled Pork 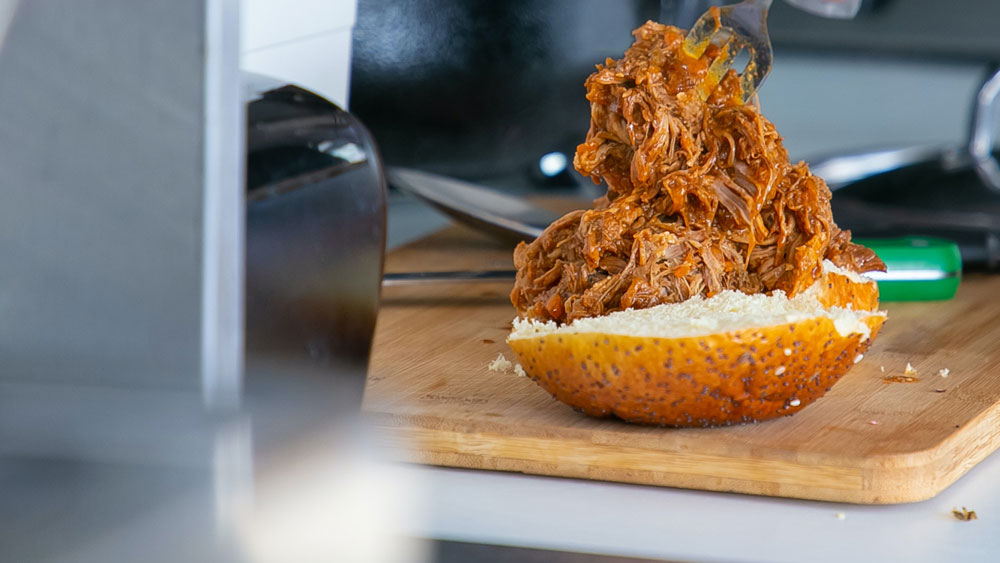 When someone makes pulled pork just right, it’s one of the most satisfying meals out there. You know the kind I’m talking about: incredibly tender pork that’s mixed with slightly chewy bark, smokiness that gives flavor but isn’t overwhelming, salted but not salty.

Pulled pork is perfect for cookouts, weeknight meals, holidays — you name it. Plus, it freezes great and makes great leftovers.

When it comes to choosing the right pork for pulled pork, there are only a few options, but there are variables to consider when choosing your cut. Fortunately, we’ve talked to the experts to figure out the best call.

Here’s to the best pulled pork of your life.

What is pulled pork?

Pulled pork is simply shredded pork that is usually smoked or slow-cooked to have a soft texture and is typically served on a simple bun with some sauce and coleslaw or on its own.

Pulled pork has a rich history in much of the southern U.S., with rubs, sauces, and cooking styles differing from state to state, city to city. Memphis, the Carolinas, and Texas are all particularly famous for their pulled pork and BBQ cultures.

What is the best cut of meat for pulled pork?

When it comes to pulled pork, most experts agree that the pork butt, also known as the Boston butt, is the best choice due to its tenderness, texture, and flavor.

The pork shoulder is one of several large muscle groups called primal cuts. Primal cuts are then broken down further into sub-primal cuts, the names of which are more commonly seen in a retail environment.

With the pork shoulder primal cut, you can either opt for the pork butt or the picnic shoulder, which is located directly below the pork butt and tends to be more muscley and firm.

If for whatever reason you can’t find a Boston butt, the picnic shoulder is your next best option. You may have to cook it a little longer and use more moisture-heavy cooking methods, but it will get you most of the way there.

Best practices for choosing the best meat for pulled pork

Okay, now that you know your options, let’s talk about quality. Here’s what to look for when picking out your pork shoulder:

Look for a good fat to meat ratio.

The pork shoulder is generally a fatty cut, but you don’t want it to be so fatty that the texture suffers and you have to do a lot of cleaning. Most pork shoulders come with a “fat cap” on one side, which is natural & often useful for flavor, but take a look at the meat and make sure there is a solid balance between the muscle fibers and fat. You’ll get better at this over time, so trust your butcher for now if you need to.

It’s no secret. Small-farm, natural pork tastes better than industrial pork. When your pork is free from additives and preservatives and the pigs eat healthier diets during their lives, the taste of the meat is richer and the texture is better. There’s no replacement for it.

Buying pork that’s in the freezer for months isn’t going to get you the best results. Look for busy, active meat companies who take pride in quality.

Now, let’s get to the good part. Here are a few “secrets of the trade” the team at US Wellness Meats have learned over the years.

1. Make your own rub, and go heavy on the application.

Rubs are very forgiving. As long as you have sugar, salt, paprika, and pepper in some combination, you’ll be alright. Have fun experimenting with your rub, and don’t go easy on your pork shoulder. Really apply a heavy amount and adapt according to the size of your cut.

2. Don’t put your meat on the smoker straight from the freezer.

Give your pork shoulder time to warm up in the fridge before smoking it. Cold meat can burn and leave you with a crisp outside and a raw inside.

3. Trim the fat cap and other parts of the shoulder as needed.

Any part of the shoulder that is strictly cartilage, webby, or tough, you can remove. You don’t have too, but if you’d like to prevent overly chewy bits it’s best to do so.

4. Consider injecting larger cuts of meat with a marinade instead of a soak.

Large cuts of meat are difficult for marinades to penetrate. Instead, try using a meat injector and putting the braising liquid directly inside the meat.

Starting with a very fine grain rub that soaks into the meat and then finishing it with a rougher grain rub is a great way to impart flavor on the inside while promoting a crispy bark on the outside.

6. Aim for getting as much surface covered by the smoker/grill as possible.

The more surface area of the grill your meat is touching, the more delicious bark and smoke flavor you’ll get.

7. Use oil to give the meat some color and help the rub stick before smoking.

Put on a pair of disposable gloves and cover your pork shoulder with a layer of olive oil or other fat source before cooking. This will help your rub stick to the meat.

8. Double wrap the meat in aluminum foil mid-way through cooking.

When the fat “bark” starts splitting and letting out some of the juices, that’s when you know it’s time to wrap it in aluminum foil. This will trap those delicious liquids and baste the meat in them for the next few hours.

9. Remove the meat when it’s finished.

Once you can pull or move the shoulder blade bone easily your shoulder is finished. Using gloves so you don’t burn yourself, pull at the blade (assuming your shoulder is bone-in). If it gives way easily, that’s when you know it’s time to pull it out.

The main reason people say to let the meat rest is to preserve moisture. That’s a fine strategy if you don’t plan on eating the meat right away, but if you plan on serving it immediately and have retained all of the juices that spilled into the aluminum foil, you can just pour and mix those juices back over the pulled pork and get the same effect without waiting thirty minutes.

And finally, here are a few of our favorite recipes. We included a few that don’t use a grill in case you don’t have one or aren’t able to grill at the moment. That’s obviously the best way, but it’s still possible to get delicious pulled pork without one.

This will get you the taste you’re imagining, I guarantee it. Consider this the ideal foundation for pulled pork smoking.

This recipe uses a sous vide to get the internal temperature perfect before forming a bark in an oven or on the grill. If you don’t have access to a smoker or prefer a little more hands-off version, then this is a good option for you.

For the easiest pulled pork endeavor, go with a crock-pot recipe. There really isn’t much to it, but with the right ingredients and rub you can still make out with some amazing pork sandwiches.

This sear-first recipe is a good way to go if you are a bit short on kitchen equipment, although it does recommend a dutch oven for the sear. A large cast-iron skillet would work as well. They also use beer in this recipe to spice it up a bit!

If you’d like to step into the world of more serious pulled pork, check out this recipe from Traeger Grills. Competition Style BBQ pulled pork usually involves being more choice with your meat preparation and using different parts of the pork for different style slices.

Next steps for perfect pulled pork

After you choose the right pork shoulder, all you have to do is get to cooking. As far as specific flavors, rubs, and sauces go, pulled pork is very forgiving. So grab a non-GMO pork shoulder, fire up the smoker, and happy cooking.

All of our heritage pork products come from animals raised in Missouri by a cooperative of like-minded small family farms. They are sustainably raised in a healthy environment allowing them to forage for food. Their diets are supplemented with non-GMO feed. No antibiotics, No GMOs, and No hormones!

Up your grill game by getting the best 100% antibiotic-free pork shoulder in America.