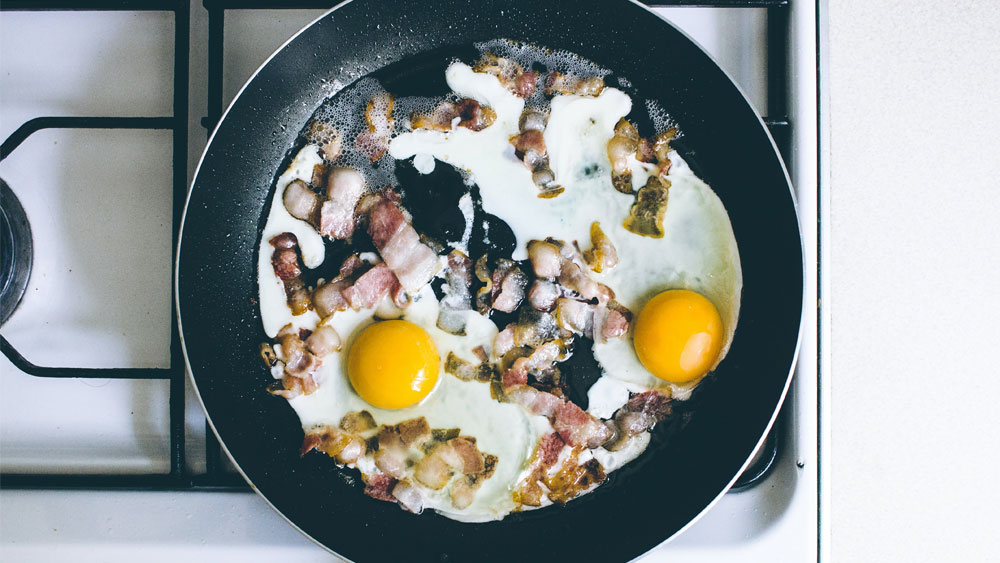 We’ve all heard about how we should reuse bacon grease or bacon fat, but then we just continue packing other things on top of it until we don’t even remember storing it until next Thanksgiving when we’re making room in the freezer and Aunt Betty reminds us again that we really shouldn’t be so wasteful.

Don’t worry — I was in the same boat until I actually spent a bit of time figuring out how versatile bacon grease really is. Once you know what to do with bacon grease, you’ll naturally reuse more of it in your day-to-day life, saving you money and adding delicious flavor to your meals.

Acquiring knowledge is most of the fight! It’s the same feeling I had when I realized how many things I could make with a sourdough starter — it’s way more than just sourdough bread!

What is bacon grease or bacon fat?

Simply put, bacon grease or fat is the fat that comes off or is “rendered” when you cook bacon. It’s the spitting hot stuff we use paper towels or baking sheets to sponge off our cooked bacon.

Bacon grease is about 40% saturated fat and has a smoke point of 325 degrees. This puts it slightly above butter (302 degrees) but a bit below olive oil (410 degrees).

That means it’s great for almost anything you’d use butter in like sauteing vegetables or making pie crusts, but you wouldn’t fry anything in it like you would a high smoke point oil such as avocado, ghee or beef tallow[*].

Okay. Now that we have that out of the way, let’s get to the good part: how to use this stuff.

The 15 best ways to use bacon grease or fat

There is one golden rule when thinking about how to use bacon fat: when trying to think of how to use it — just swap it for butter in pretty much anything. That goes for pie crusts, sauces, sandwiches — you name it. Anytime you want a little more bacon (and who doesn’t) in your meal, swap it in for the butter.

1. Use it when cooking eggs or in literally any breakfast food

Unsurprisingly, bacon grease is pretty much awesome in anything you normally make for breakfast. Whether you’re making hash browns, eggs, frying up some potatoes, or biscuits, sub bacon fat in for butter or oil for a delicious time.

2. Cook scallops in it

Bacon grease scallops are to die for. Trust me on this. All you need is a cast iron, some fresh scallops, bacon grease, a little pepper, and a pinch of salt (depending on how salty your bacon fat is) for one of my favorite meals. Add some bacon mashed potatoes and high-heat asparagus on the side to make it a complete dinner.

3. Make a butter bacon spread for next time you eat corn on the cob

I usually opt for a rosemary butter on my grilled corn, but if you’re grilling kabobs or something lighter it can be nice to kick up the corn savoriness a bit with a butter bacon spread. All you have to do is combine some bacon fat with butter and season it to your liking. Cajun seasoning works super well here.

Sub half of the butter required for bacon fat in any biscuit recipe to make it Southern style. Here’s a recipe to get you started.

5. Cook any sort of vegetable in it

Any breakfast, lunch, or dinner when you plan on using a skillet to cook up some vegetables like spinach, asparagus, bell peppers, etc. can be improved with subbing in bacon grease instead of olive oil. Just try it, you won’t regret it!

6. Use it to make delicious pasta sauces

Bacon pasta sauces are incredible and so easy to put together. Cook down onions, mushrooms, or whatever you want in your sauce in bacon fat and then add-in heavy cream if you want an alfredo vibe or cream cheese with parmesan if you want a more traditional cheese sauce. Toss it in the pasta of your choice and voila!

7. Use it to caramelize the onions in any recipe that calls for it

Caramelizing onions is when you cook down onions on low heat for so long that the onions brown. You can use them on sandwiches or put them over steaks, and cooking them down in bacon just adds more… well, bacon.

Take mayonnaise, add in some garlic you lightly cooked in bacon fat, add some more bacon fat if necessary, add a spritz of lemon, a bit of pepper, adjust for salt, and then get ready for the best dipping sauce of your life.

9. Use it to season your cast iron

This is the simplest way to use bacon grease. Instead of wiping down your cast iron with olive oil, use bacon fat! This will help your cast iron adopt some of that bacon flavor as well, which is a great way to up your breakfast game.

10. Use it when cooking other meats

Bacon grease is great for what chefs call “layering”, it’s when you use similar flavors and stack them on top of each other. Any meat — so chicken, steaks, pork chops, etc. could all be cooked in bacon fat instead of oil or butter.

11. Use it when you make popcorn

You have two options to “baconize” your popcorn. The first is just using it as the oil base to pop the kernels. The second is to drizzle melted bacon grease over the top after you make them. Or both. All options are delicious.

An easy way to up your sandwich game is to finish your sandwich by frying it in a thin layer of bacon fat. This is one of my favorite ways to spruce up grilled cheeses.

13. Make homemade white gravy with it

While sausage is the usual choice for making white gravy, bacon gravy is also amazing. I grew up eating gravy and biscuits, and it’s tough to beat. It’s also so easy. Next time you’re feeling a Sunday brunch, whip up some homemade bacon gravy and enjoy!

I realize we covered cooking vegetables already, but bacon cabbage deserves its own category. They were made for each other. Seriously, try it.

Add a simple southern twist to any fried rice recipe by cooking everything in bacon fat instead of vegetable oil. This works particularly well with chicken fried rice.

Now that you have some of the ways you can use bacon grease down, let’s talk about how storing and keeping bacon grease works.

How do you store bacon grease?

Storing bacon grease is really easy. All you need to do is get a glass jar or other airtight container that won’t melt or bust when putting in a freezer.

Here are some pro tips on storing bacon grease:

Always use a fresh container

This is important for two reasons. One, by using a fresh container you ensure you’re not mixing potentially bad (rancid) bacon fat with good bacon fat. Two, it works as a psychological reminder to actually use the bacon fat. If you get in the habit of storing the bacon grease in the same container but never actually use it, you haven’t started the right habit! Make it a goal to use your existing bacon grease before you make another batch of bacon.

Use jelly jars, mason jars, or a strainer jar.

Some people recommend using a cheesecloth or special strainer container to ensure your bacon fat or grease is pure and doesn’t have any of the “bits”. Those bits can make the fat go bad faster, but if you’re in a consistent habit of using the grease it isn’t a big deal — just try your best to only pour out the grease and keep the rest of the bits in the skillet.

How long does bacon grease last?

Does bacon even go bad? Yes! Absolutely. It does take a while, though. If you store bacon grease in a proper container in the fridge, you will get around 6 months out of it. If you store it in the freezer, you’ll get about a year[*]. That varies according to the temperature, but you definitely have a comfortable window to use the grease within.

How can you tell if bacon fat has gone bad?

Can you freeze bacon grease?

Of course! If you freeze bacon fat, it will last in the freezer for around up to a year. Just make sure you use a container like glass that doesn’t split or crack under cold temperatures.

What is the difference between bacon fat and lard?

Think of lard as the umbrella under which bacon fat sits. Lard is rendered pork fat, whereas bacon fat is specifically fat from the belly of the pig that comes from bacon. This distinction is important because bacon is often smoked, so with bacon, you’ll get that smoky flavor and with most lard, you won’t.

Can you buy bacon grease?

Yup! And we have it! Our Uncured Hickory Smoked Sugar-Free Pork Bacon Grease contains absolutely no preservatives, no nitrates, and no nitrites (except those naturally occurring in sea salt). It’s simply our Sugar-Free Hickory Smoked Bacon Ends rendered into bacon grease — that’s it.

How do you dispose of bacon fat?

Disposing of bacon fat is easy. If you’re not storing it, then all you need to do is let it cool and toss it in the trash. It’s more useful to think about what you shouldn’t do with bacon grease.

And there you have it! Now you have no excuse for storing and reusing your bacon fat. It really makes the kitchen more delicious, and you can save money on expensive oil and butter.

What do you get when you render the best quality bacon ends in the United States? Bacon that comes from animals raised in Missouri by a cooperative of like-minded small family farms?

Pigs that are supplemented with non-GMO feed, aren’t fed antibiotics or hormones and are free from sugar and nitrate/nitrites?

The best bacon fat on the market, that’s what.