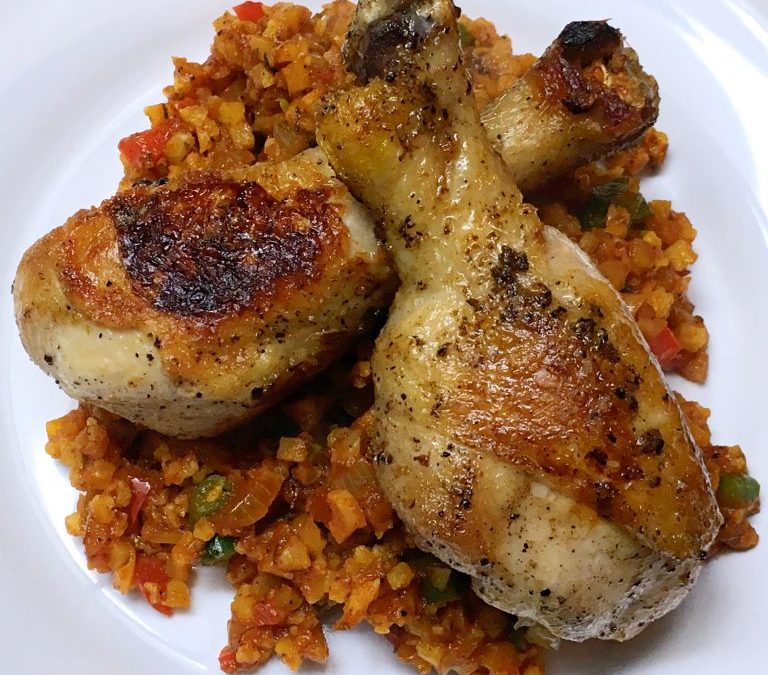 We love trying new dishes, especially international dishes that give us a fun challenge in the kitchen. May Featured Chef Mandy Pagano has shared a delicious latin-inspired dish. We hope you give this Arroz Con Pollo recipe a try.

“My home state of Florida has quite the vibrant community of Cuban ex-pats. Miami, for example, is a haven of Cuban peoples and culture, and there are enclaves of refugees and their families in ever major city across the state. With people and culture in place, food traditions inevitably follow, and so Cuban restaurants and Latino markets are all over, much to our delight!

Being native to Florida, I’ve lived and grown up with Cuban folk my entire life, and they are a lively and lovely bunch.  Very recently, I was able to sit down and chat about Cuban cuisine with my good friend and fellow ketonian, Babi Hernandez. We talked about the make-up of classic Cuban cooking, as well as tips and tricks on how to make many of the staple dishes compliant.

Arroz con pollo, rice with chicken, is one such staple dish. It’s basically a spin on the Spanish classic paella, but with local ingredients: chicken, rice, onion, garlic, bell pepper, green peas, and “yellow condiment” for that nice pop of color.

Overall, this wasn’t a very hard dish to ketofy. Caulirice is pretty much always going to stand-in for rice, and with a few small exceptions, most of the other ingredients were already compliant. It was a matter of scaling back on some of the carb-heavy aromatics (keeping the flavors with smaller quantities), and making a few executive decisions on substituting for the non-compliant ingredients.

In order the obtain the golden color traditionally associated with this dish, many moderns use a saffron substitute called Bijol powder. Made from anchiote seeds, it imparts that classic color while using ingredients native to the Americas. Unfortunately, most modern preparations of this ‘yellow condiment’ include masa corn flour, which is very much a non-keto additive.

Alternatively, you may use the traditionally Spanish saffron to yield the same color. It is also trendy now to substitute in a little ground turmeric for that pop of yellow. Each one of these spices imparts a slightly different flavor profile, so I encourage you to experiment with finding what tastes best to you and your family.

One other problem ingredient I had to give some thought to were the green peas. Now, I could leave them out altogether, because they’re such a minor part of the dish, but the more I thought about it, the more I decided I really wanted to find something suitable to give the dish that same punch of green. It’s very true when it’s said we eat first with our eyes, and the coloring of the various traditional ingredients is what makes arroz con pollo such a beauty.

I didn’t want to lose that aspect of the dish. I decided to cut some compliant green beans into a comparable size as the non-compliant green peas and substitute it in. If you don’t like green beans, or are opposed to them in your Cuban food, feel free to leave it out.” 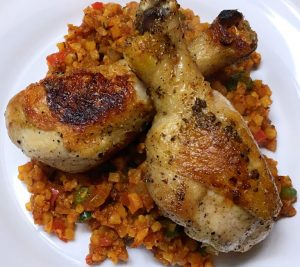 Recipe and Image By Mandy Pagano | My Ketogenic Kitchen

Mandy Pagano is a recovering food addict. As a no-nonsense wife, and home-educating mother of two, her passions in life are reading, music, and teaching her children. She has a life-long love of cooking, and is a self-taught home chef. Mandy’s favorite cuisine is Southern-style, but she’s also got a taste for spice, so Tex-Mex and Cajun/Creole dishes are frequently found on her table. Mandy is the co-host of the popular food blog Ketovangelist Kitchen. Visit My Ketogenic Kitchen to learn more about Mandy.